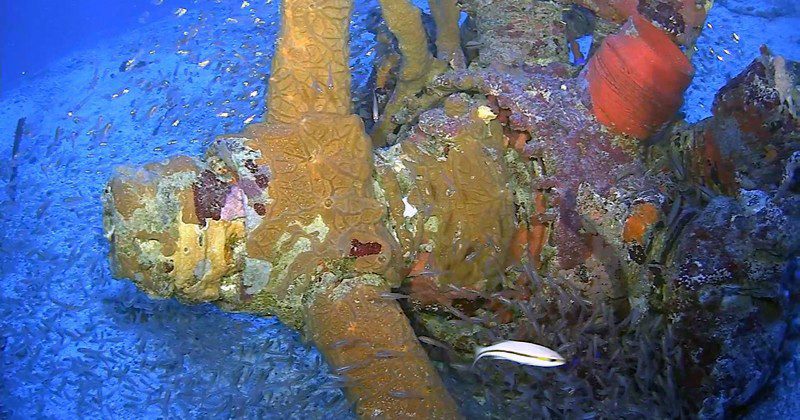 The wreckage of three USAF bombers downed over Truk Lagoon during WW2 have been located by the charity Project Recover, the mission of which is to recover remains of US forces personnel missing in action in wartime.

The planes, two Douglas SBD-5 Dauntless dive-bombers and a Grumman TBM/F-1 Avenger torpedo-bomber, flew from the aircraft-carriers USS Enterprise and USS Intrepid for the last time during Operation Hailstone in 1944.

The Project Recover team, led by Dr Mark Moline of the University of Delaware, are now hoping that remains of the seven air-crew can be identified and recovered.

The wrecks lie at depths of 30-65m, at sites said to be far from those regularly visited by recreational divers in the Micronesian state of Chuuk.

From April 2018 Project Recover mounted four expeditions covering 27sq miles of Truk Lagoon, using a combination of side-scan sonar, scuba divers and ROVs. The discoveries were made on the third outing and documented on the most recent one last December.

Moline said that the planes had been flying at high speed when shot down and were no longer intact, the scattered debris field partially explaining why the wreckage had not been identified before.

Details of the finds are being shared with the Federated States of Micronesia and the USA’s Defence POW/MIA Accounting Agency (DPAA) in the hope that a comprehensive search of the area can be undertaken.

Thirty US aircraft and 103 crew were lost during Operation Hailstone on 17/18 February 1944 while attacking Japan’s Combined Fleet anchorages.

The assault destroyed some 250 Japanese aircraft and sank around 40 ships, including two light cruisers and four destroyers – the losses that left Truk Lagoon as one of the world’s foremost scuba-diving attractions.

Project Recover, which works in partnership with the University of Delaware and Scripps Institution of Oceanography at the University of California, has so far found 28 aircraft, leading to 13 recoveries of remains.

It plans to run further expeditions this year in South-east Asia, the Pacific and the Middle East.