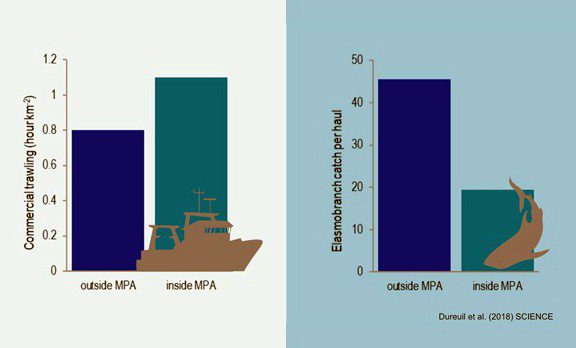 Nearly 60% of European Union marine protected areas (MPAs) are not only failing to protect threatened biodiversity but are allowing more industrial fishing than in unprotected areas, according to shock research led by Newfoundland’s Dalhousie University.

Governments have been lauded for escalating the designation of MPAs around the world, but those in Europe at least are accused by the scientific team of failing to set or enforce minimum biodiversity-protection standards.

The study, published today (21 December) in Science, began as an investigation into North Atlantic shark populations, and was carried out in collaboration with scientists from Germany’s GEOMAR Helmholtz Centre for Ocean Research and the Sharks of the Atlantic Research & Conservation Centre (ShARCC), which was co-founded by the lead author, marine biologist Manuel Dureuil.

Following up on previous research into use of open-access satellite data to track industrial fishing patterns, the team zeroed in on fishing around the 727 MPAs that cover 29% of Europe’s territorial waters.

They were surprised to discover that fishing still went on in 59% of these zones, covering nearly 17,000sq miles of “protected” ocean – and even more surprised to find that industrial trawl fishing was actually 38% higher per area in MPAs than in unprotected zones.

The research indicated that as fishing fleets were attracted to the well-populated MPAs, shark, skate and ray populations in the heavily trawled areas had declined by 69%.

“Industrially fished MPAs will not adequately protect the species that most require it, such as sharks, skates and rays,” said Dureuil. “These are among the most endangered marine animals today.”

Sharks and rays are biodiversity indicators, being the first species to disappear and the last to recover. “Even though many of these MPAs were not established to protect sharks and rays, our findings question their effectiveness for biodiversity protection under current policy,” said Dureuil.

“If we call something a protected area, it should actually be protected,” commented co-author Boris Worm. “There’s oil and gas exploration in some MPAs; there’s industrial fishing. That makes it unclear what an MPA actually means.”

The researchers have however also underlined that lightly fished areas do allow for recovery, giving hope of saving endangered species if notice is taken of their recommendations that “protection” should mean just that.

The paper can be read in full in Science.