He has moved from the Coral Triangle to the West Country but does HENLEY SPIERS regard it as a comedown in terms of diving? Not a bit of it, as his words and images indicate – he now has an iconic British site on his doorstep 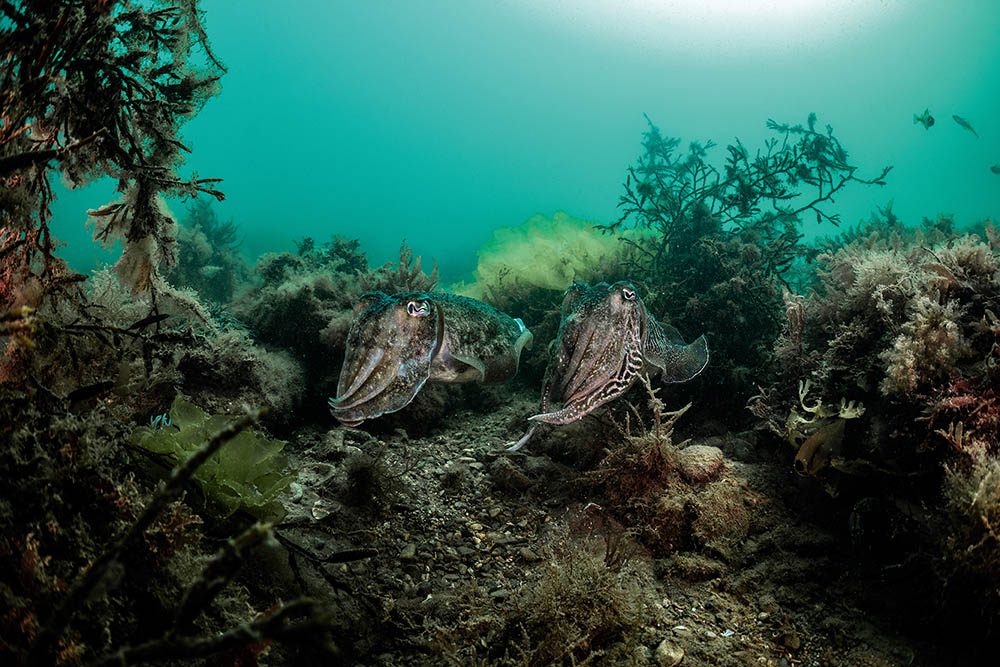 At the start of 2020 my family moved from the Philippines to the UK. Little did we know how fortuitous our timing would be. If the relocation had been planned just a few months later, all plans for any form of international movement would have been scuppered.

Diver friends in the Philippines laughed in bewilderment at the prospect of our leaving Cebu’s tropical waters for Devon’s temperate aquatic environment.

I laughed too and could understand their surprise but, in truth, after more than 20 years of predominantly warmwater diving, I was secretly excited at the prospect of really getting stuck into British waters.

Feel free to call me weird, but at this stage I truly find green water and all its inhabitants to be more exotic than its blue cousin.

While I have loved travelling to new locales for diving, I am also extremely fond of having a backyard dive: one site, close to home, that you can visit on demand and get to know intimately.

My backyard dive went from the Shangri-La Marine Sanctuary in Mactan to Babbacombe beach in Torquay.

Now while Cebuanos might be bemused at this change in situation, I am aware that avid Brit divers will be muttering “you lucky so and so”, because Babbacombe is an iconic dive-site in the UK, with an enduring popularity among underwater photographers in particular.

If Swanage Pier is one such Mount Rushmore dive, as described by Alex Mustard in the September issue of DIVER, Babbacombe is right up there alongside it.

Although you are in the popular touristic area of “Torbaydos” a visit to Babbacombe beach always has a hint of adventure, as you take a sharp turn at the top of the hill and make your way down a precipitously steep and narrow lane.

A beautiful bay awaits at the bottom, along with a small car-park, which can get rather competitive during the summer months.

When the sun is shining, Babbacombe’s beach is prized by more people than just divers, so an early arrival is advised to secure the nearby parking that our gear-laden activities require.

The machine accepts only coins, a point worth noting in this contactless era. Another practical note is that the toilet facilities have remained closed so far this year.

On the plus side, there is a much-appreciated cafe serving hot drinks and food. You will also find the Cary Arms & Spa, the nearest pub and accommodation option, which has recently undergone an upmarket remodelling.

Sadly there are no local air-fills available so, even if staying on location, you will need to venture to Teignmouth in search of more, precious, pressurised gas.

This scenic bay provides a natural harbour from the prevailing westerly winds, and can generally be dived year-round. If the wind does turn east, or north-east, then Babbacombe will be exposed and is probably best avoided.

As you look out to sea, Babbacombe Pier is to the right, popular with fishermen and the kids who enjoy leaping off it.

To the left, the South-west coastal path carries you to nearby Oddicombe beach. If visiting friends or family, there is plenty to keep them entertained while you disappear for a dip!

Ease of access from the car-park to the water is another attraction for this spot, with either steps to the beach or the slipway affording us divers a simple way in.

A high tide makes that even easier, and while you can dive Babbacombe at any tide it is easier to enter at high water, and the visibility will tend to be better too. The silty bottom in the bay can be stirred up inshore when the tides move out.

Entering the water during the warmer months, you are greeted by a forest of bootlace weed stretching up from the seabed right to the surface. Catch it with a few metres of visibility and it makes for an ethereal opening to a dive – a spectacular environment, open only to those who take the time to glimpse under water.

Yet another point in Babbacombe’s favour is its relaxed topography. Sloping gently down, with no currents present, you will struggle to get lower than 8m deep.

Long, leisurely dives await, with just a little commonsense required when surfacing, because there tend to be some watercraft around.

The expanse of the bay is substantial, and worthy of multiple dives. Looking outwards from shore you will find a rocky reef system, and seagrass meadows to the left.

To the right there’s a very shallow rocky drop-off, which can be followed right up to the pier (you know you’re there once you start spying abandoned fishing gear). Swim straight out far enough and you’ll reach a sandy expanse, and a whole new environment to explore.

As I make my way over the kelp-covered seabed, a corkwing wrasse dashes for cover. With vivid colouring and intricate face-markings, this is a fish reminiscent of those we encountered back in the Philippines. I caught him mid-nest building, a responsibility that falls on the males of this species, and is most likely to be witnessed in spring.

Babbacombe acts as a marine-life nursery, and you might come across the eggs of cuttlefish and sharks. Common cuttlefish eggs are black and hung together like oversized grapes.

A single egg embryo lies inside the cream-coloured pouch, visible to the naked eye. If undisturbed, the juvenile shark will develop over many months, eventually breaking free from the egg-case.

This bay is not only a place for nesting, but also mating. With the advent of spring, adult cuttlefish have historically visited Babbacombe to procreate, an activity that involves furious competition between the males.

Locals say that fishing-pots have had a noticeable impact on the number of cuttlefish aggregating in recent years.

One can only hope that lockdown has provided a brief respite from fishing pressure for these charismatic cephalopods.

Some cuttlefish will linger, and I was happy to encounter a pair on the reef, gently serenading one another close to a cluster of eggs.

Kelp fronds are worth checking closely, because they can host a variety of macro subjects. Sea-slugs can be found in clusters, feeding on encrusting bryozoans such as sea-mats.

Sea-mats spread over the kelp as a colony of square shapes so perfectly geometrical that you’d think it was factory-made.

This is a favourite food-source for lined polycera sea-slugs, with white bodies and yellow lines. Painted topshells can also be seen on the kelp, although divers might more often refer to these pointed animals as “mermaid’s nipples”!

Blue-rayed limpets are less than 2cm long but have vivid blue markings once you do get your eye in. They also feed on kelp, favouring that closest to shore.

Swimming slightly deeper over the rocky reef, purple-tipped snakelocks anemones adorn many surfaces and can act as a host for crustaceans.

Scorpion spider crabs often disguise their long-limbed bodies among the tentacles, and if you’re very lucky you might come across a decidedly exotic anemone shrimp that has used climate change as a valid excuse to migrate to British waters.

It can be a little alarming to glimpse one of these creatures, and if you come across one in a feisty mood it will leap off its hind legs and use large foreclaws to karate-chop in mid-water.

Spider crabs will aggregate in enormous quantities to moult, using a “safety in numbers” approach during this vulnerable moment.

At times like these, the seabed will be literally covered in massive crabs, sometimes piled two or three high.

In some years an aggregation will occur at Babbacombe, although it is by no means a reliable event. The sight of hundreds of spider crabs together is an incredible, yet somewhat apocalyptic natural event to behold.

The key topographic feature of the site is Mushroom Rock. You might argue that it is the only discernible feature, and descriptions of where to find interesting marine life are often classed as “near Mushroom Rock” to a comedic degree.

The rock lies in about 8m of water on the seabed. Head north from the beach steps to find it, or descend close to the yellow Cary Arms buoy.

Bib crowd beneath an overhanging arch, and common lobsters will occasionally take shelter close by.

The lobster are shaded in navy blue across most of their bodies, but have more flamboyant splashes of bright blue on their legs and tail.

If you move slowly enough, Mushroom Rock is rich with marine life and could easily occupy a whole dive.

The floor is crawling with gobies, dragonets and the odd butterfish.

The shaded walls of the rock are carpeted with jewel anemones: a supermacro visual treat for underwater photographers, they come in a firework display of colours and textures.

Don’t rush to ascend at Babbacombe, because the finds continue all the way to the shoreline.

Intertidal white boulders encrusted with limpets are hugely popular with blennies. Shannies are frequently spotted here, moving in quick dashes before coming to a rest on their pectoral fins.

Tompot blennies, unmistakably attired with red, branched tentacles, can also be spotted in the nooks and crannies.

These could easily be seen even by any snorkellers in your party, who might also run into the various jellyfish that accompany plankton blooms.

Moon jellyfish have short tentacles and four rings seen within their transparent bell, which I am reliably told are their gonads.

The elegant compass jellyfish has brown line markings on its bell, reminiscent of a compass.

Entering the water one day from the beach, some nearby children told me: “There are jellyfish!”, presumably as a warning.

My response – “Great!” – seemed to come as a surprise to them, but is a good reflection of the magnetic appeal jellyfish hold over underwater photographers.

This summer we even witnessed shoals of sand-eels appearing across British coasts, and I marvelled on dives as my entire line of vision was filled with life under water.

Temperate waters also have the thrill of seasonality, and I’m excited to see how Babbacombe changes as we head into autumn and winter.

It might be colder, it might be harder, it might be less diverse than a tropical coral reef, but Babbacombe and British diving offer a great diving experience in our backyard that shouldn’t be missed.

• Head for and turn down Beach Road, Torquay TQ1 3LX. Watch for oncoming traffic as you wind down to the car-park and bring coins because you’ll need them there. Gear rental and air is available at Teign Diving Centre, Quay Road, Teignmouth TQ14 8EL