The premier German raider ship in WW1, she finally sank as a merchant vessel in a Norwegian fjord in an RAF attack in WW2. She lies in 75m – and how often can you do a deep wreck dive just off the shore? asks RENE B ANDERSEN 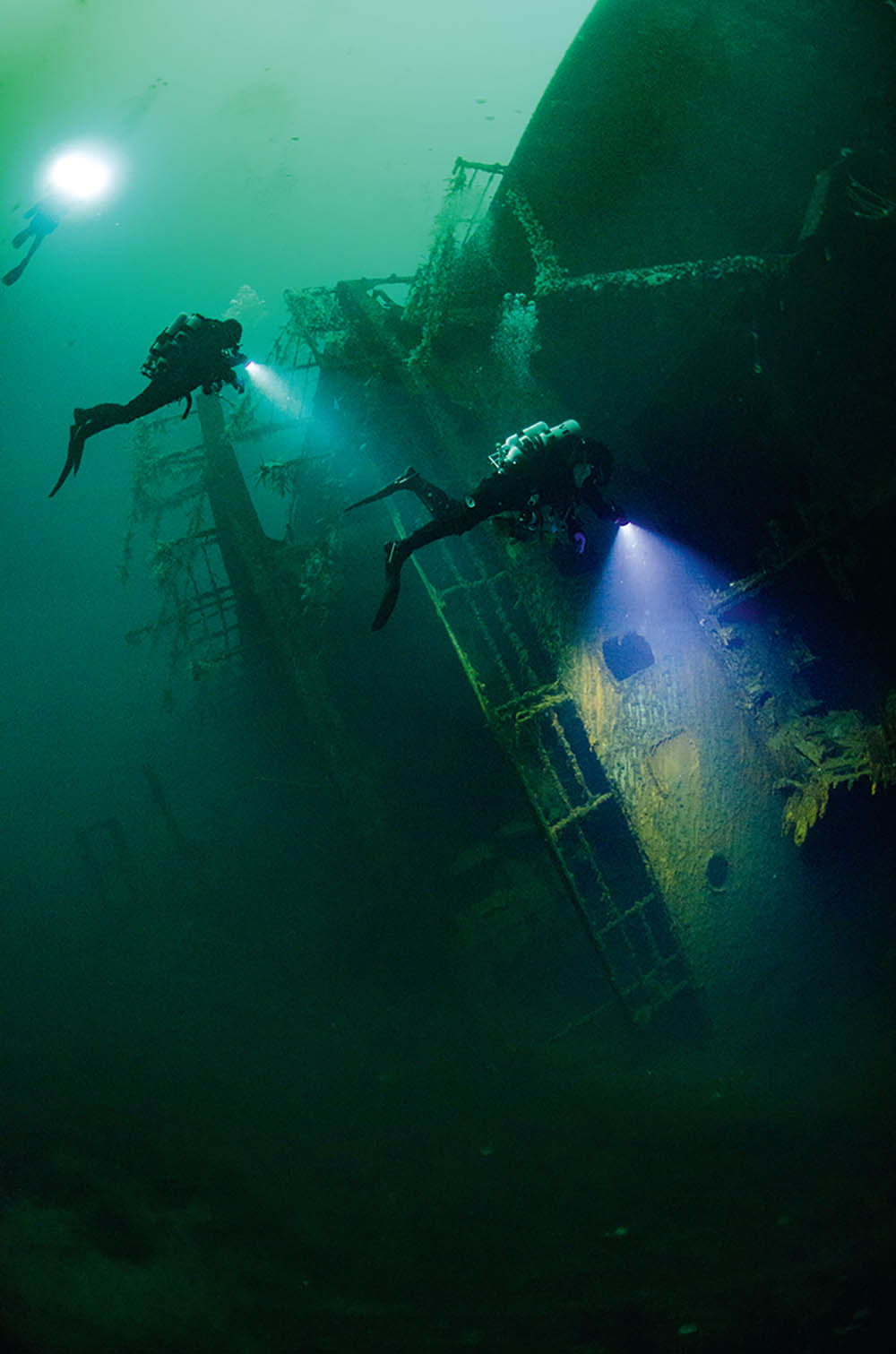 There are still portholes on the wreck. Before the Oldenburg sank she burned badly, which is why there are open spaces allowing access inside.

THE PUNGO HAD BEEN BUILT in 1914 to carry bananas between Cameroon and Germany, but she could not avoid World War One. She came into German naval service in 1915 and was rebuilt as a raider ship.

Raiders were merchant vessels – mainly refrigerator ships because they were designed for speed – that carried guns and mines.

They would sail under a false name and flag, with camouflaged armaments and crew, and in this way hope to pass through the British blockade undetected. Then they would be free to lay mines or capture or sink enemy cargo vessels.

Equipped with four 6in and one 4in guns, two torpedo tubes and 500 mines, the Pungo became the Mowe and then the Vineta in 1916, and carried out several raids in the Atlantic, Kattegat, Skagerrak and Baltic Sea, capturing and sinking 42 ships. HMS King Edward fell victim to one of her mines.

Another casualty was the Georgic, which was sunk with 1200 horses on board, and the armed cargo ship Otaki, which resisted but couldn’t match her opponent – the most successful of all the German raider ships.

At the end of hostilities in 1918 the ship was handed over to the British as war compensation, and went back to carrying bananas under the name Greenbrier. Then, in 1933, a German shipping company bought her and renamed her Oldenburg.

During WW2 the Oldenburg was pulled back into military service, but with a less-frontline assignment, carrying cargo between Germany and Norway for the Nazi occupiers.

The ship was once again armed, with anti-aircraft and anti-ship guns. And it looked as if she would make it through this war unscathed too, until the events of the morning of 7 April, 1945.

THE SHIP, WITH A CARGO of fish bound for Germany, was anchored on the west side of Vadheim in Sognefjorden in Norway. She was in convoy with another merchant vessel and two escort ships, V5301 and V5302, old armed whaling boats.

Twenty-one RAF Beaufighter and 16 Mustang aircraft then turned up, and the ships’ crews were mistaken if they thought the high mountains around the fjord would afford them any protection.

Their AA guns went into action, but several rockets struck Oldenburg beneath the waterline, and she started taking on water and sinking.

There is an old picture showing her lying lopsided and burning, but only one of the crew and seven of the AA crew were injured.

Albert Carr, a former 489 Squadron pilot who took part in the attack, visited Vadheim in 1987.

He said that on that morning in 1945 he had expected a warm welcome from the well-armed German ships and his plane had been hit, although he had managed to fly back to base.

Later, the British aircraft clashed in the outer part of Sognefjorden with German planes based near Bergen, with losses on both sides. The other cargo ship, Wolfgang LM Russ, survived, although it was to be sunk the following month in Danish waters.

The wreck of the Oldenburg lies on the west side of the fjord, and it’s a shore-dive. A small road leads down to a red house with a private parking area, but the owner doesn’t mind divers parking there if they put the required fee (the equivalent of £5) in the mailbox near the steps he has placed to make it easy to get into the water.

Ultimately he tells me that he plans to rent out the house, which would be perfect for diving.

From the steps, it’s 80m out to the buoyed wreck, and there is normally a buoy on it.

On descent, the first thing you notice is the stern at around 27m. The vessel lies on its starboard side and the stern, with its big anchor openings, is raised some metres above the bottom. It seems that the wreck must have slid down the slope.

The anchor and chain is gone, but the anchor-winch is still on the deck.

A little further down lies a platform for an anti-aircraft gun, possibly a 20mm flak gun. There is a steel plate around the edge, but it lies inverted in the mud and it appears as if the gun is still down there.

After the first cargo hold comes the mast and loading frame, which trail down to the seabed with overgrown wires still connected picturesquely to the railing. The crow’s nest still hangs on the mast.

THE BELL WAS SALVAGED in the late 1980s, although it was hard to find because it was over the crow’s nest, where no-one would have thought to look for it.

The superstructure is at around 45m, and still standing in good condition on two levels, with railings around the edges.

There is even glass in some of the windows, but the timber bridge is missing or, rather, the remains are lying piled up on the seabed.

You can still see the bolt-holes where the steering console was salvaged in the early 1990s, a task that can’t have been easy considering its 240kg weight.

By coincidence, I managed to get hold of a picture of it in perfect condition – as well as a picture of the bell, bearing its old name Möwe.

Part of the wooden deck is rotten, and there are big holes where a diver can swim in – but with care, considering the wreck’s age and the silty bottom. A diver lost his life in this way in 1990.

After the bridge, we saw a milk-white fog that continued downwards and limited the visibility. It might have something to do with fresh water that comes into the fjord from the rivers.

Several lifeboat davits are nicely overgrown with peacock worms and sealoch anemones. Another structure, when I look at the old photos, must be where the funnel was standing, though I have to admit that I didn’t notice it lying on the seabed.

A skylight leads down to the engine-room. There was still glass in some of the portholes and some of the covers were open, making it possible to look down inside, although I was too busy taking pictures of the wreck.

Further along was another structure with, in front of it, what looked like a pressure tank. Between this section and up to the bridge I saw several gun turrets.

By number 2 mast is a nice deck with lots of tubeworms, but by that point the depth is around 60m.

DOWN ON THE STERN, there is a walkway that goes out to both sides of the railing, and behind it various structures that will repay investigation on my next visit. On the seabed is a lot of debris that probably fell as the structures  rusted away.

At the bottom of the ship you can see the screw and rudder a little further up, both in perfect condition and making a beautiful sight.

And with the way the wreck lies, it stands proud. You can swim under it, but what caught my eye were the large rocks on the rudder. How did they end up there?

The depth here is 75m, so time goes fast. After seven minutes, the computer shows that it will take 30 minutes to surface with deco.

There is also plenty to look at on the way up. If you follow the wreck up and come up to the bow, you can keep the direction. There is a lead line, which goes up to 6-8m, and you end up right by the stairs, where you can also place stage-bottles.

There is no need to strain the body to lift everything all at once after decompression. Instead of making a free ascent, you can swim along the edge of the wreck, and deco time goes by that much  faster when you have something to look at. You can even find a few nudibranchs.

I had dived the Oldenburg before, back in 2010, on air. At that time I was limited to 40m but this time on a rebreather I was able to see the whole wreck down to 75m.

But there remain many details that I need to look at more closely next time, including the engine-room, the stern with its superstructure, the guns at the bottom and the superstructure at the wheelhouse.

Perhaps I can also penetrate some of the holes in the wreck, which could make for beautiful photos.

We managed three dives on this trip, but we would definitely need more next time – and there is also the Inger Six, a wreck of almost the same size that I have yet to explore.