Many dives offer us lessons that can serve us well in future, if we choose to take note. Take Bill’s observations on a recent drift dive, as reported by SIMON PRIDMORE 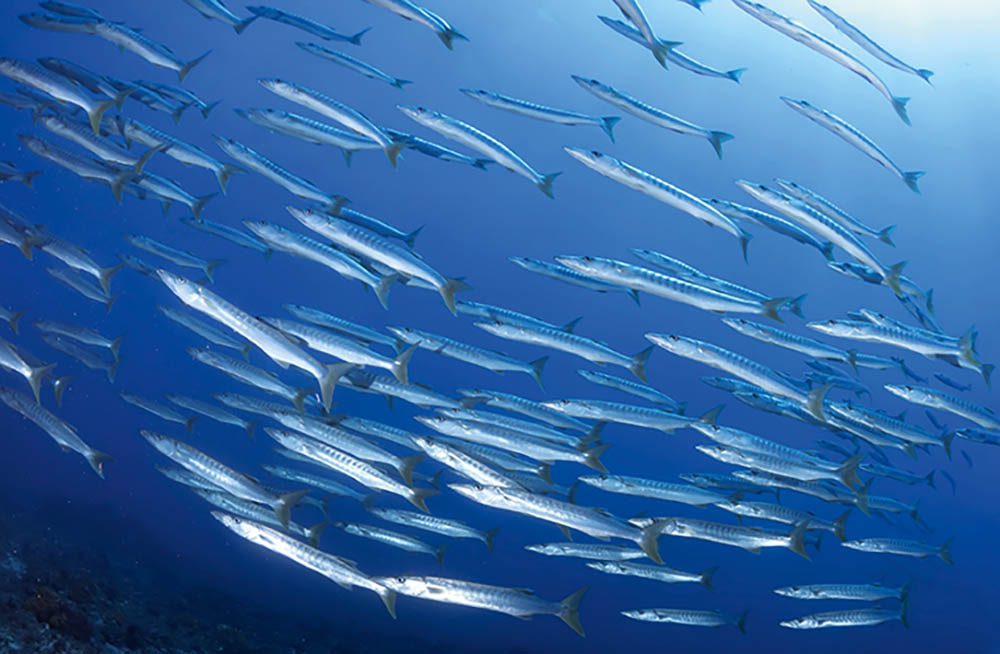 Filming barracuda in a ripping current can take your breath away!

The other week, UK diver Bill joined a group on a boat heading out on a dive to find a huge school of monster yellowfin barracuda that would often gather when the current was running at a particular site off a tiny Pacific island.

The moon would be full that night and the tide charts looked promising, so everybody was hoping for action.

The other folk on board were an instructor from a local club with six divers in his charge.

After a quick search, the boat captain reported a sighting of what looked like a large mass of marine life on his fish-finder, issued instructions to his guide and dropped the divers into calm, clear water close to the shore.

The divers swam out across the bay, following the guide. At a certain point, the guide stopped and, gathering the group together, indicated that they were about to emerge from the protection of the bay into the current.

It hit them almost immediately, and swept them away. They found themselves drifting from bommie to bommie at a depth of around 20m.

When the bommies seemed to be large enough to shield them from the flow a little, the guide would indicate that they should tuck in behind, set their current-hooks and hang there for a while, gazing into the blue, hoping that the barracuda would oblige them with a sighting.

After 20 minutes or so, a school of a couple of hundred fish appeared and approached them, before circling around them for a few minutes. All the divers had their cameras out and got some great shots and footage as they hung in the full force of the flow.

This was however always threatening to make them lose their balance on the end of their current-hooks, and caused a little water to leak into their masks and regulators whenever they incautiously turned their head to the side.

As the school of fish moved away, the group unhooked and started to drift again. Bill saw two divers move up in the water column, away from the bottom.

Both had been breathing more heavily than the others, while watching the fish and getting buffeted by the current, and Bill guessed that they might be low on air.

Their instructor did not seem to have noticed, so Bill moved a little closer to them, prepared to lend help if necessary.

He had also seen that the seabed was falling away, and guessed that the bommies below were now at around 25 to 30m. He had no desire to go deeper so late into the dive.

Then another, even larger school of barracuda turned up, swimming around the drifting group, placing the divers at the centre of a fish vortex.

Bill was happy to watch from midwater, finning determinedly against the current to stay with the barracuda.

However, the two divers he had been watching immediately dropped down to the seabed in an effort to get a more stable platform for their video.

Bill saw them both breathing heavily as they struggled to get into position. Each was generating an almost constant stream of bubbles.

Eventually the barracuda left, and the two divers began to ascend again. One was evidently anxious and kept looking at his pressure gauge. His instructor noticed, swam over to him and they began to ascend, sharing the instructor’s air.

The instructor kept looking over at the second heavy-breathing diver, evidently concerned but powerless to help.

Bill approached the second diver and signalled to ask if he was OK, pointing at his own contents gauge. The diver responded: OK. Bill remained dubious, and decided to stay close by.

Then the diver started ascending fast and all Bill could do was gaze on, hoping that he would arrest his ascent before he surfaced. This he did, by deflating his BC completely.

He then reached for his SMB, which had a small reel attached. Good, thought Bill, the diver was going to do a safety stop on his SMB, then go up.

However, having dumped all the air from his BC and made himself negative, the diver started to come down again, rather than go up, and, so involved was he with sorting out his reel and SMB, he seemed unaware that he was descending.

He passed Bill at 13m and was heading back towards the seabed when he finally inflated his SMB and sent it upwards.

At this point, he encountered a new problem. He was at a depth of around 20m when he put up the SMB, but evidently he did not have 20m of line on his mini-reel. So up he went again, dragged up by his expanding SMB.

Bill saw him execute a brief stop and then surface. When Bill ascended and got back on the boat, he looked for the diver, and asked him if he was all right.

The diver looked a bit sheepish, but was otherwise fine.

Techniques to Take Away

1. Stay focused on your air and decompression status, especially when you’re diving in a current.

2. Practise controlled breathing so that it becomes instinctive. You will then be able to manage stressful situations without increasing your breathing rate and using more air.

3. Don’t allow yourself to become distracted and get your priorities confused. The primary aim on every dive is to survive, not to see big fish or take photos.

4. Practise raising your SMB from depth while staying neutrally buoyant, until this too becomes instinctive.

5. Be aware of your depth as you are raising your SMB. Turn your computer so that it is on the inside of your wrist and you can glance at it easily while you manipulate your reel and line.

6. Know how much line you have attached to your SMB. Measure it on land and write the length in indelible marker on the body of the reel.