What is a ‘normal’ shark? The sort we see on shark feeds in the Caribbean, or swimming around, often in the distance, at so many exotic locations? Think again, suggests JAMIE WATTS. Additional photography by MALCOLM NOBBS 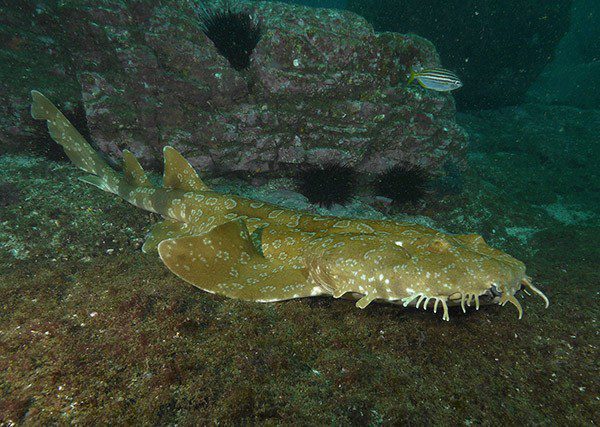 A wobbegong – part of the carpet shark family – sitting on the bottom in Nelson Bay, Australia.

SOMETHING SEEMS JUST a little bit off here. It doesn’t look like what a shark ought to look like. It’s rather broad and flat, and it’s just lying there, rather than swimming around.

It’s camouflaged, rather like a scorpionfish, actually – down to the tufts and flaps of skin around its floor-hugging chin.

But I can see those five gill-slits – albeit rather short ones – and the two dorsal fins and top-heavy tail, which all look at least a little bit “shark-like”.

The feel of this fish is somewhat lethargic and squat compared to what we think of as a shark. But this wobbegong, sitting at 7m just off the beach in Nelson Bay, north of Sydney, is every bit as much a shark – and in fact closer to the “average” shark – than the classic tropical reef sharks that we think of when we picture a shark.

Our popular conception of what a shark is can be seen in our media representations; movie, magazine and video media seem to give almost all their weight and coverage effort to two families of unusually large, active sharks.

The first family is that of the requiem sharks – the tropical and sub-tropical reef sharks. These include the tiger, bull, lemon and reef sharks.

It’s rather a successful family, and until recently they’ve been easy to find, easy to film and – with a bit of chum in the water, a bit of close-up wide-angle and some dramatic music – easy to portray as dramatic.

But this family represents only 50-odd of the nearly-500 shark species, a little over a tenth of all sharks. They are not really what an average shark is.

The second group getting screen- and print-time are the shark rock-stars – the brash, powerful, dramatic lamnids.

Big, partly warm-blooded and definitely predatory, the great white and its cousins operate at the high-energy super-predator level, competing with the marine mammals at the top of the ocean food-webs.

But the reality is that these sharks include only a handful of specialist species, including the sand tigers or raggies, the makos and porbeagles and the threshers.

They are at the extreme end of what a shark can be and do, and the populations of most have only ever been small.

In ecological terms, and in numbers, these animals are greatly removed from the reality of what most sharks are. So what is more typical?

THERE ARE 33 FAMILIES of sharks, and members of the group have varied just a little about a simple body plan and ecological plan over 200 million years. All of them are predators, and all have the simple, protrusible, clamplike, usually underslung jaw structure, and serially replaced rows of teeth.

These teeth have a similar structure to the backward-pointing, spiny scales that give their skin a sandpaper-like feel.

The teeth tend to be sharp and pointed, but are specialised for a range of prey, which is in many cases small, shelled invertebrates or small fish.

The vast majority of sharks – 400 species, the “average” sharks, if you like – don’t get any bigger than your leg, and spend much of their time saving their energy, lying on the seafloor or cruising slowly and supremely efficiently around rocky reefs.

The low-energy baseline is how they work – it’s the key and the formula to their long-term success.

They do not naturally spend their time thrashing vigorously around chunks of tuna bait or leaping out at seals, dolphins or people. Most of them seek out crustaceans, worms and small fish hiding in reef crevices or over sand.

They have a mouth smaller than yours, and teeth smaller than those of a domestic cat. The 100 species of dogfishes and 200 species of unrelated but very similarly built catsharks and their related families of smallish, slender sharks make up the majority of the species of ground sharks fitting this description.

IN RICH TEMPERATE and sub-tropical seas these sharks, particularly the catsharks, are key players in seafloor habitats, from diving depths down to 1000m or more.

Shysharks, pyjama sharks and puffadder sharks all belong to the catshark family. With more than a quarter of all shark species and found in a range of habitats all over the world, this is the most successful of all shark families.

South Africa and sub-tropical and temperate Australia are particularly rich areas for catshark species diversity, and many of Malcolm’s pictures shown here are from these places.

Malcolm travelled to Tasmania specifically to look for and photograph the draughtboard shark, another catshark. Finding the shark was much easier than he expected, and he came across several just lying motionless on the seabed at Deep Glen Bay.

In cool seas catsharks (and their distant cousins the dogfishes) live slow lives, taking a few years to mature, and investing significant resources and perhaps a year at a time in slow-growing, well-developed young.

Apart from the catsharks and the dogfish group, there is quite a range of other unrelated families built around a very similar basic body plan.

The carpet shark group of 43 species tend to be somewhat more tropical than the catsharks and dogfishes.

Carpet sharks vary around a similar, sometimes slightly chunkier, body-plan than the basic catshark / dogfish build, with the notable addition of slightly more developed sensory snout barbels for finding prey under sand, and a more forward-aligned mouth and flattened, slightly pig-like snout with which the sharks suck prey as much as grab it.

Carpet sharks are particularly diverse around the eastern Coral Triangle and northern Australia – which is the shark-diversity epicentre of the world as well as the coral, reef invertebrate and reef-fish diversity epicentre.

THE CARPET SHARKS include the largish nurse sharks, the long-tailed and ridge-backed zebra shark (named for the stripes of the juvenile; the adults have spots and are one of several unrelated sharks that share the common name “leopard shark”), the broad, flat, ambush predator wobbegongs, the slightly smaller “blind sharks” (so named for their habit of closing their eyes when removed from water – they are far from blind) and the slightly more slender, longer-tailed bamboo sharks.

The grey carpet shark is a relatively common bamboo shark in parts of Australia. Despite living in that country Malcolm dived for years before seeing one, because their range was a little north of where he normally dived.

The grey carpet shark might just hold the record for the shark with the biggest number of common-name aliases, including brown-spotted catshark, spotted catshark and brown-banded bamboo shark.

All the carpet sharks live a similar low-energy, bottom-dwelling lifestyle around shallow coral and rocky reef areas, like the cooler-water dogfishes taking advantage of the upper food-web of large bottom-dwelling invertebrates and medium-sized fish.

One carpet shark species – the whale shark – has lifted up from the seafloor to find another niche. The same sucking mouth parts that nurse sharks and other carpet sharks use for slurping fish and invertebrates have expanded in the whale shark.

With expanded gills and a free-swimming lifestyle it has become adapted to sucking plankton, allowing this one carpet shark to become the biggest shark of all and live a rather different life to its cousins.

The 20 species of flattened angel sharks might at a glance look a bit like the wobbegongs, but they are their own group and not closely related.

They can seem somewhat ray-like, lying hidden half-buried in the sand with their dorsal- and tail-fins flattened to the seafloor but, unlike rays, which forage downwards, the angel sharks are like the wobbegongs in waiting for prey to swim over the top of them.

The nine species of heavy-headed bullhead sharks are not so far removed from the “typical” shark lifestyle and body shape, and may even represent something close to the original shark body plan. They are much older than other surviving sharks, pre-dating the Jurassic dinosaurs.

Their fin spines are reminiscent of the dogfishes, and their slightly pig-like snouts are not unlike those of some carpet sharks, though the ridges or crests above their eyes that give this group their common name are distinctive.

All of these groups of sharks – by far the majority of the group – have short gill-slits, which give a strong clue about their low-energy lifestyles.

They simply don’t have enough muscle or an active enough metabolism to need the huge gill-slits of a mako or a great white, or even of a reef shark.

Most of the oxygenation of their gills is achieved by pumping of the spiracle, the rounded gill-like structure that looks like an “ear”.

This allows them to keep their oxygen supply going while saving energy, spending much of their time resting on the seafloor.

The bodies of most sharks are somewhat flat-bottomed, broader than they are tall and suited to spending time resting on the seabed.

Many of us have a vague idea that sharks are ancient (modern sharks arose somewhere near the start of dinosaur times), and perhaps somewhat “primitive”. This is because they have

Recent thinking, however, is that this skeleton, rather than being primitive, is an elegant exercise in energy-saving.

AS WITH MANY ASPECTS of shark physiology, a cartilaginous skeleton contributes to superb energy efficiency. Specifically, it contributes to both efficiency of movement and energy transfer, with the slight elastic spring of the skeleton a key part of the swimming effort.

The reality of sharks might be considered to be less sexy than the media image. I disagree; there is something extremely elegant about the magnificently understated, sleek efficiency of these animals.

Unlike mammals, and even some of the bony fishes, they burn cool. They don’t waste energy and this works.

It has done for considerably longer than we mammals have been around.