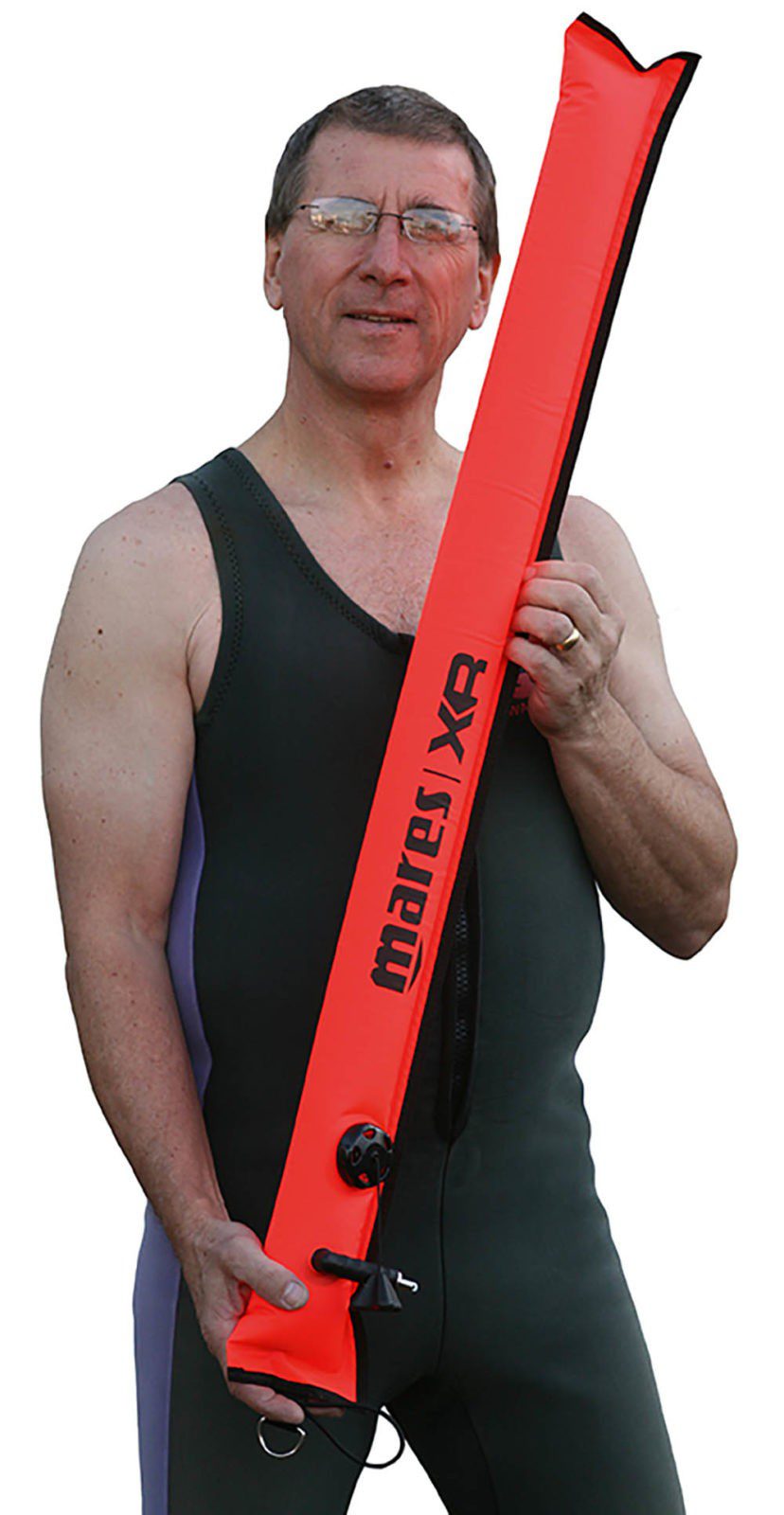 THE SHALLOWER YOU ARE, the tougher it is to maintain neutral buoyancy, yet we teach newbies to launch DSMBs in the shallows, and it’s usual to end the check-dive of a liveaboard trip with some DSMB practice, yet check-dives tend to take place at shallower sites.

In both cases the reason for shallow water is obvious, but you can’t argue with the laws of physics, and it’s not unusual to see divers heading involuntarily toward the surface.

The result is often that divers either deliberately under-inflate their blob, or simply can’t get enough gas into it before the upward pull means that they need to release it.

That means a limp sausage floating on the surface and not standing firmly upright.

The shallower the launch and the less well-practised the diver, the more likely the flaccid buoy, and a floppy sausage is neither use nor ornament.

Which brings me to the Mares XR Training DSMB, which is a sort of half-size blob designed to make things easier for those just learning.

Italian manufacturer Mares has been in the diving business for a long time and tends to make good stuff. Lately, technical diving has been a growth area across the scuba equipment arena, and the company has its XR – extended range – series of products to cater for the needs of the tekkies.

It sent me three DSMBs from its XR range to try. Two were full-size buoys, in DSMB orange and emergency DSMB yellow, but the third was the smaller, orange training DSMB, and that was the one I went for.

The training blob comes rolled into a 7x12cm bundle and weighs less than 150g, held tight by a loop of sewn-in-place bungee. I used it with my usual finger-spool, looping the string through the stainless-steel ring firmly stitched to the bottom of the blob. The larger DSMBs have a webbing tail, with the ring at the end of the tail.

Inflating the training DSMB has been well thought-through. You undo the bungee and unroll the short buoy to reveal a one-way valve into which you simply pucker up and blow.

The buoy is sized to fill easily with one big breath and fills to give a sausage 1m long and 8cm in diameter.

The advantage when shallow and in training is that the gas going into the buoy is coming out of your lungs, so the net change in buoyancy is minimised, increasing only slightly because the buoy will be higher than you are.

No big buoyancy change equals no scary upward movement, and that means confidence gained more quickly. I found it possible to launch the buoy from just a metre down and get it properly inflated with no drama, and it inflates just as easily on the surface if necessary.

Then, when you’ve mastered the pucker and blow, you can learn to use a low-pressure inflation-hose on the valve to inflate the buoy even more quickly and smoothly.

And I have to say that it’s the best way to inflate a DSMB I’ve yet come across. You simply push the end of the inflate valve into the open end of a low-pressure inflation hose, and the sausage will fill fast enough for you to release it under control before the effects of its positive buoyancy drag it from your hands.

You can use any inflator hose, the one from your suit or your BC, or even a spare fitted specially for the purpose. The hose fitting doesn’t make any difference: universal, Apeks and AP all worked for me.

The XR training DSMB is an excellent idea. I’d have liked one when I learned to launch a DSMB, and the hose-inflation method makes the bigger buoys very tempting indeed.