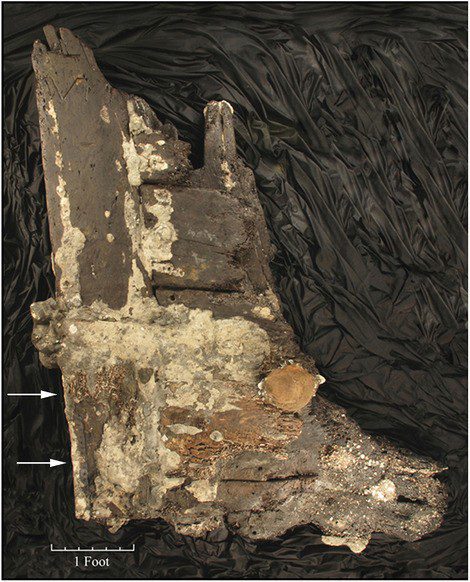 Clues recovered by a dive-team support speculation that when the pirate Blackbeard ran his flagship onto a sandbar at Beaufort, North Carolina 300 years ago, it was a deliberate act.

Maritime archaeologist Jeremy Borrelli of East Carolina University has been diving and researching the shipwreck since 2012, and has been looking into lead sheathing thought to have been used to repair a badly leaking hull.

The evidence reinforces the views of some historians that the QAR was driven ashore “in a premeditated move by Blackbeard to rid himself of a ship that he felt was no longer serviceable”, says Borrelli.

Edward Teach aka Blackbeard captured the ship near St Vincent in 1717, the year before its loss.

At that time a French slave-trader called La Concorde, it had been recorded as having developed several major leaks as far back as 1711. Sheets of lead would be kept on ships to be cut to size as needed to plug such leaks.

“We know that the ship had documented cases of significant leaks forming in the hull prior to its capture by Blackbeard and his pirates,” said Borrelli. “After it was captured, Blackbeard kept the pilot, two carpenters and the caulker from the French crew.

“These individuals would have a good working knowledge of the ship’s condition and so this decision to keep them makes sense to increase the longevity of the pirate’s newly acquired prize.”

The patched-up leaks didn’t stop Blackbeard sailing the renamed ship between Africa and the Caribbean for six months, attacking British, Dutch and Portuguese merchant ships along the way.

Borrelli said that further study of the remaining timbers and other features was likely to put beyond doubt whether “the leaky hull was either a mistake or a calculated manoeuvre on the part of one of history’s most infamous pirates”.

His preliminary findings have been published in the International Journal of Nautical Archaeology.