Botched scuttling too costly to correct

Botched scuttling too costly to correct 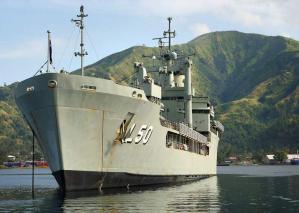 When you pay the equivalent of around £5.5 million to prepare and sink a ship intended as a world-class diving attraction, you might expect it to land on the seabed as planned.

Ex-HMAS Tobruk, the Royal Australian Navy’s first purpose-built amphibious heavy-lift ship, had two helicopter decks, tank and vehicle decks, roll-on/roll-off function and accommodation for up to 520 troops. The 127m ship, decommissioned in 2015 after 35 years’ service, was sunk as an artificial reef in June, 15 miles off the Queensland coast in Great Sandy Marine Park, as reported on Divernet.

The culmination of a five-year campaign by local communities for a military wreck to be sunk in the area, the plan was for it to stand upright on the seabed. However Birdon, the engineering company contracted by the state government to undertake the work, failed to get it right.

The 127m vessel ended up on its starboard side, rendering much of the preparatory work to make penetration safe for divers redundant. Holes had been cut in both sides to provide access and lighting into the deeper parts of the vessel, and the upper rear decks would have been within the 18m depth range for less advanced scuba divers and freedivers, with the internal tank-deck at around 25m. The seabed is at 28m.

Now, with divers still held back from exploring the wreck four months on, the government has obtained quotes for correcting the Tobruk’s orientation and considered an independent report by Dive Queensland. As a result it has concluded that not only would it be too expensive to right the Tobruk at a cost of up to £11m, but the work would take at least 12 months and incur serious risk of damaging the vessel.

Instead Birdon will be expected to pay around £500,000 to make the wreck safe for divers in terms of entry and exit points and light penetration. The work is expected to take around 40 working days, after which the wreck-site will be opened to divers.

Critics of the decision insist that Birdon should have had insurance in place to cover the cost of bringing the Tobruk upright. The Queensland government now plans to launch a major marketing campaign to promote diving on the portside-up Tobruk.