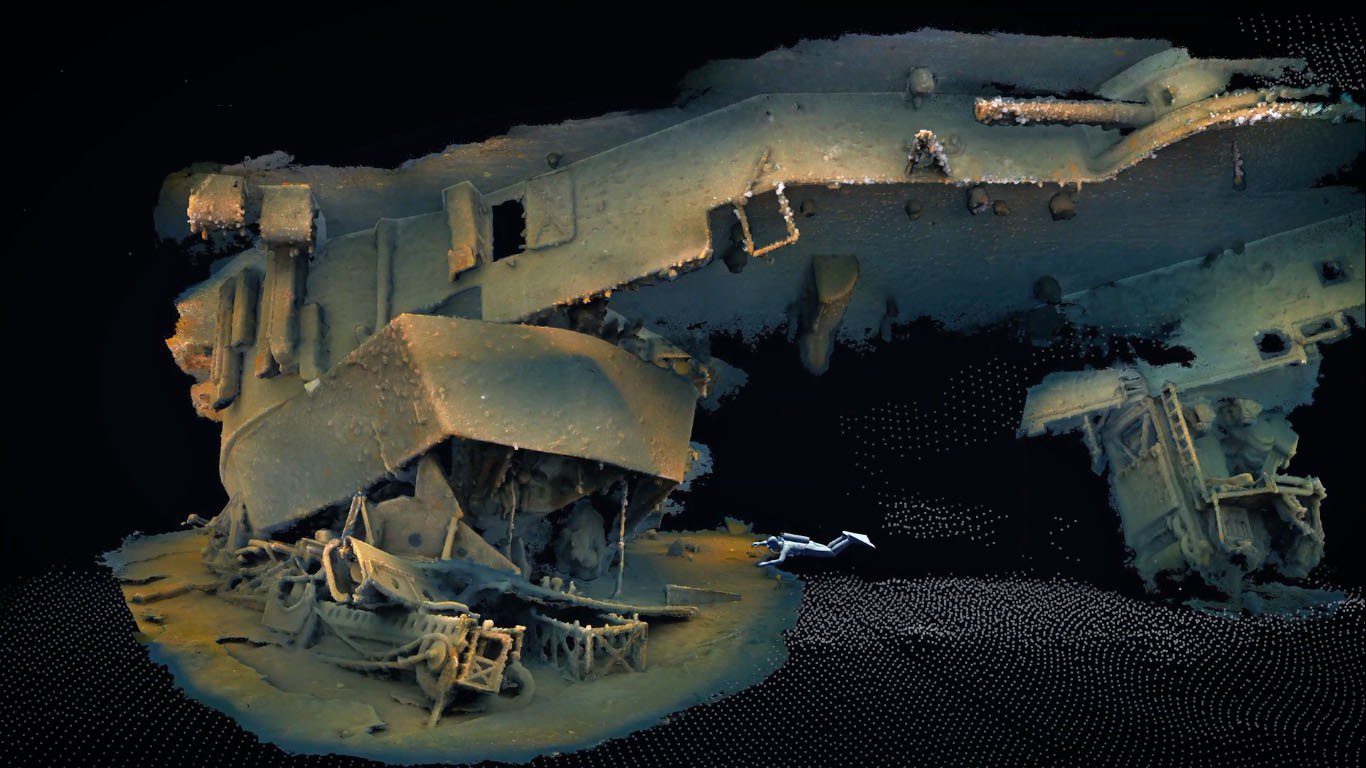 Essential free viewing for wreck-divers is “Fallen Oak”, a new 26min documentary marking the 81st anniversary of the sinking of HMS Royal Oak in Scapa Flow.

The Revenge-class battleship sank on 14 October, 1939, at the start of WW2, after being torpedoed by the German submarine U-47 while at anchor. The rapid sinking caused the deaths of 835 of those aboard, at least 100 of whom were boy-sailors.

Prof Chris Rowland and Kieran Duncan of the University of Dundee have created 3D photogrammetry images of the wreck based on key features captured last year by a team of volunteer divers, led by Emily Turton and Ben Wade of the Orkney dive-boat Huskyan.

Rowland led the original Adus 3D mapping of the wreck from sonar scans in 2006, and the documentary goes behind the scenes to explain the process behind creating the new, more sophisticated, virtual imagery.

During WW1 the Royal Oak was part of the Grand Fleet at the Battle of Jutland, and between the wars served in the Atlantic, Home and Mediterranean fleets. At the start of WW2 the battleship was designated as obsolete but provided what was seen as a safe base for more than 1200 sailors.

The protected wreck is normally visited only by Royal Navy Northern Diving Group divers, who replace a White Ensign flag on the stern on each anniversary of the sinking. This year, because of Covid restrictions, that dive did not take place, although a ceremony was held at the surface.

The Huskyan divers were permitted by the Ministry of Defence to undertake the project. “Fallen Oak” can be seen here.

Another new wreck-related video is “The Legacy of the Rooswijk”, the third film about the research and excavation of the 18th-century Dutch East India Company shipwreck on the Goodwin Sands in Kent.

It documents progress on conservation of artefacts found on the wreck, which has been excavated by Dutch cultural heritage agency RCE working with Historic England and MSDS Marine. This 17min video is also free to view.

Meanwhile a blend of content from above and below the surface is presented in the annual Ocean Film Festival World Tour, offered this year as a virtual instead of a live event in the UK. There are two shows, each with a 48-hour viewing window, on 25-27 October and 17-19 November.

Along with the selection of ocean-related short films, viewers are promised access to Q&As with the film-makers, behind-the-scenes footage and a live prize draw.

The festival originated in Australia and works to promote the Marine Conservation Society and Surfers Against Sewage. It has toured live venues in the UK and Ireland for each of the past six years.

Films start at 7.30pm, with audience-members invited to explore the virtual foyer of the “Backyard Theatre” from 6.30pm. Price of admission is £10.

You can watch a trailer or book here.