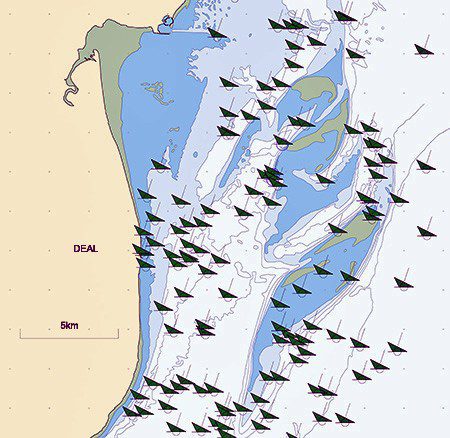 Archaeologists working with the Goodwin Sands SOS campaign group to block next year’s dredging operations by Dover Harbour Board have taken the unusual step of publishing the locations of five wreck-sites of interest in the area.

They hope that UK divers will be encouraged to investigate the sites before the dredgers can move in, and report on their findings. It is also hoped that proof of the existence of historic wrecks in the area might yet be enough to stop the dredging.

“The Ship Swallower”, as the ever-shifting Goodwin Sands off Deal in Kent are known, has been estimated to conceal more than 2000 ships from the Bronze Age onwards, as well as aircraft from World War Two. Comparatively few wrecks have been found, but discoveries have tended to be well-preserved.

The harbour board wants to dredge more than 3 million tonnes of sand and gravel from the South Goodwin Sands for its Dover Western Docks Revival development, with any remains being destroyed in the process.

“A licence has been granted for dredging, even though the geophysical survey found archaeological targets,” Mallory R Haas, Chief Archaeologist for 3H Consulting, told Divernet. “Let’s identify these sites before the dredger destroys them!

“This is not something we usually do with wreck-sites that may be be unique, historically important and possibly war graves, because of the obvious chance of looting and destruction,” said Haas, who feels “it would be better for these targets to be looked at and recorded before they’re destroyed than not to, even with the chance of them having items removed … we can at least help to organise some ‘rescue archaeology’ and identify what is located at these targets.

He also believes that “if one or more of the targets reveals something of international importance, or perhaps the wreckage is owned by another country, there is a stronger possibility that the dredging can be stopped, or at least postponed until all of the sites can be looked at properly.”

There are 24 targets in the proposed dredge area, though only five are big enough to warrant urgent investigation. Information, photographs or video of whatever lies on the seabed at these locations, as well as details of anything lying inside the 250m buffer zone around the dredge area, should be submitted to 3H Consulting or Goodwin Sands SOS.

The target’s positions can be found here