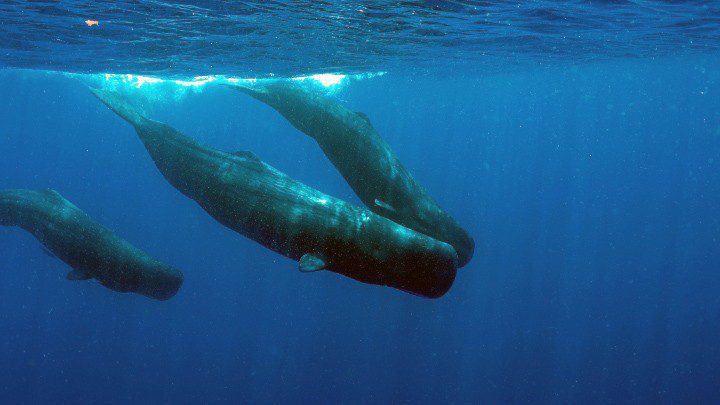 Some of us are morning people and others not, and it seems the same is true of cetaceans. A new British-led study has found that, while some of the thousands of sperm whales in the Mediterranean are active around the clock, others start their day in a laid-back way – and the researchers think they know why.

A team led by the Centre for Ocean & Atmospheric Sciences at the University of East Anglia (UEA) recorded sperm-whale clicks over a large sea area for several months, using 1000m-rated AUVs called Slocum gliders and Seagliders. These carried acoustic monitors that focused on the powerful, highly directional sounds sperm whales emit while foraging.

During a foraging cycle the whales were found to produce the type of click that indicates this activity 60% of the time. The monitors were able to detect and identify the sounds from as far as 12.5 miles away.

The recordings confirmed that the whales were widespread in the north-western Mediterranean, with a possible hotspot in the Gulf of Lion between Spain and France, where higher rates of clicks were recorded.

Twenty-four-hour monitoring during the winter months suggested that the whales’ foraging strategies differed between areas. In the Ligurian Sea between Italy and Corsica and in the Sea of Sardinia the clicks showed the whales foraging around the clock.

However, in the Gulf of Lion larger groups of sperm whales were found to seek out intense oceanographic features, such as when storms churned up water layers to bring nutrients from the depths to the surface.

Among these whales, foraging activity continued round the clock but showed a marked decline at dawn. The scientists think this might be linked to prey activity. The whales’ major prey squid stay deep except during the night – so if they descend again at dawn it would explain the decrease in sperm whale foraging clicks from that time.

“The clear daily pattern identified in our results appears to suggest that the sperm whales are adapting their foraging strategy to local prey behaviour,” said lead author of the study Pierre Cauchy. “The findings also indicate a geographical pattern to their daily behaviour in the winter season.”

The scientists reckon there are fewer than 2500 mature Mediterranean sperm whales, existing under threat of being caught in active fishing or ghost-nets, struck by ships, ingesting marine debris or disturbed by human-generated noise.

“We need to understand the Mediterranean sperm-whale population better in order to work towards their conservation by eliminating threats,” said study co-author Dr Denise Risch. “This is also true for other marine mammal species globally, and gliders allow us to go into new areas, which we wouldn’t have any observations from otherwise, and also at times of year when we are not usually monitoring.”

Participating in the study besides the UEA was the UK’s Centre for Environment, Fisheries & Aquaculture Science, the Scottish Association for Marine Science and Gothenburg and Sorbonne universities.

The report is published in Endangered Species Research.