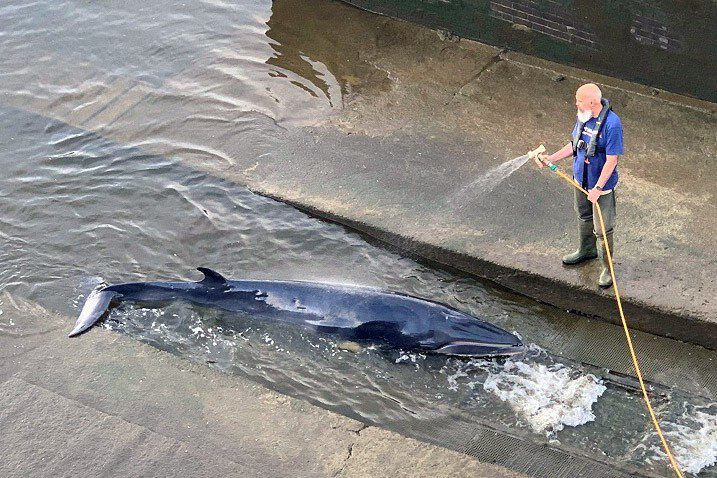 Marine-life news stories rarely occur so close to the Divernet offices, but a stranded young minke whale that had found its way as far up the River Thames as Richmond in Surrey had to be rescued in the early hours of this morning (10 May).

First spotted in west London near Barnes Bridge at around 1.30pm yesterday, the 3-4m whale drew crowds of onlookers when it became stuck on boat rollers at Richmond Lock & Weir towards the end of the Tideway some six hours later.

A team of rescuers from the Port of London Authority, the RNLI, British Divers Marine Life Rescue (BDMLR) and the London Fire Brigade worked for hours to examine and manoeuvre the distressed whale onto an inflatable pontoon.

It was then towed back eastwards along the river as far as Isleworth, where it is thought to have slipped off the pontoon at around 1am and swum away.

The smallest of the great whales, minkes can still grow as long as 10m.

A BDMLR spokesperson told Sky News that the whale had appeared to be in “fairly poor” nutritional condition and had sustained injuries to its pectoral fins when it stranded. The rescuers are now hoping that it will be healthy enough to make its way back out to sea.