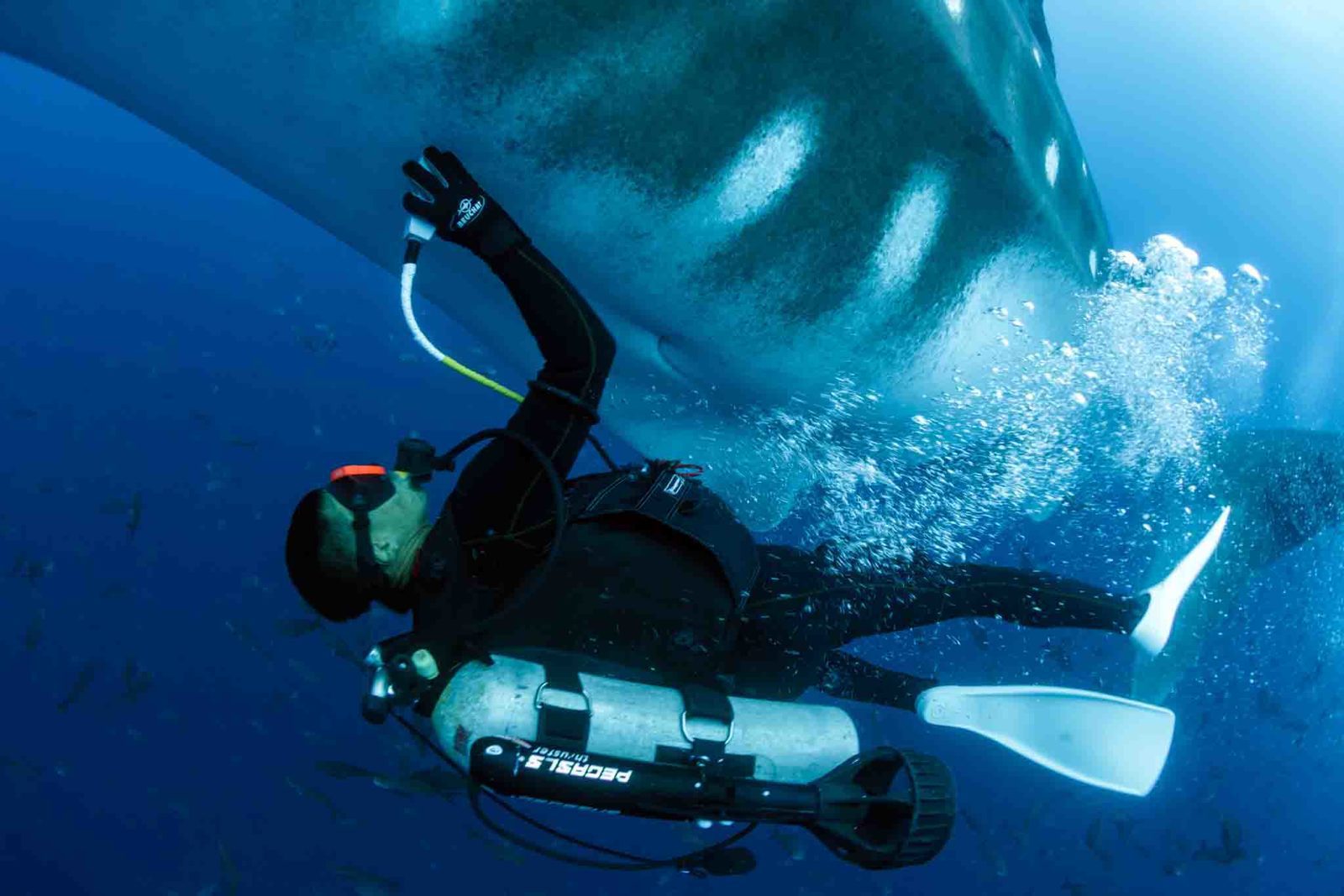 In a bid to unlock the long-maintained mysteries of whale-shark reproduction, researchers in the Galapagos have carried out ultrasound scans on free-swimming whale sharks, and taken blood samples from adults for the first time ever in the wild.

The work was carried out during a two-week expedition to remote Darwin Island by scientists and conservationists from Ecuador (Galapagos Whale Shark Project, Galapagos National Park and Galapagos Science Centre), Japan (Okinawa Churashima Foundation) and the USA (Marine Megafauna Foundation and University of San Francisco), led by the GWSP’s Jonathan R Green.

Adult female whale sharks up to 14m long gather each year at Darwin, one of the few known places where they do so, and the researchers wanted to assess their reproductive state.

“Whale shark breeding is a mystery,” said expedition member Dr Simon Pierce of the MMF. “Only one pregnant shark has been physically examined so far, back in 1995 in Taiwan. That ‘megamamma’ shark had 304 little whale-shark eggs and pups inside, all less than 60cm in length.”

The team scanned the sharks using a 17kg ultrasound system in a waterproof case. Whale-shark skin can be more than 20cm thick, so the 30cm penetration of the ultrasound waves proved as problematic as checking the entire belly area of the shark as it swam. Dr Rui Matsumoto from the Okinawa team used a tank-mounted DPV to help keep pace with the sharks.

“We saw dive-groups a couple of times at the site, and I can only imagine what they thought,” said Dr Pierce. “Why is that guy diving with a briefcase? And a jetpack?”

The operation allowed the researchers to view and identify reproductive organs such as the ovaries.

“We confirmed the presence of follicles in the ovaries but none of the images captured embryos or egg capsules inside the uterus,” said Dr Matsumoto. “These adult female sharks we saw at Darwin Island might be on their way to mate further offshore.

“I am confident that we can judge the sexual maturity, and probably also determine the pregnancy of whale sharks in the field, using the underwater ultrasound.”

“Sex steroid hormone levels in the blood are an excellent way to monitor reproduction in individual sharks,” said Dr Ryo Nozu, who analysed the samples. “This study measured levels of estradiol, progesterone and testosterone of wild, adult female whale sharks for the first time in the world.

“Estradiol could be associated with follicular development, and progesterone could be involved in ovulation and pregnancy. Over time, as we sample more whale sharks, we can build up a complete picture of their reproductive cycle by combining the blood sampling with the ultrasonography.”

“These big female sharks are not going to give up their secrets easily,” commented Jonathan Green. “There’s a lot of work still to do to understand the reproductive processes of this endangered species. However, this trip proved that it is possible to research their breeding in the wild.”

Satellite-linked tags were attached to the whale sharks’ dorsal fins to track their onward movements.