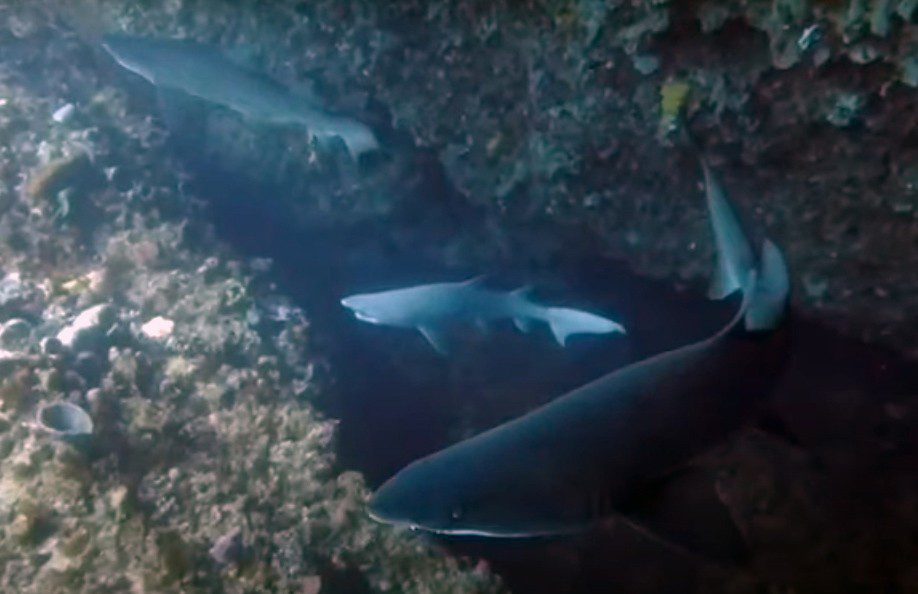 Scuba divers have encountered what they believe is the first white-coloured grey nurse shark ever seen in Western Australia – and possibly the entire continent.

Video footage of the female shark was captured by Alan Chng while on his first shark dive on 21 May, and later posted on YouTube.

Chng was on a boat-dive with a group from Fremantle dive-school Bucket List Diver. They were off Rottnest Island, a nature reserve near Perth, at a site rarely dived because of often-challenging conditions there. The shark was spotted while the divers were at a depth of around 28m.

Chng said that initially the shark was immobile and he had thought it was dead. He realised the significance of its colouration only later, from the excitement of the dive professionals on the boat.

The shark is believed not to be fully albino but “leucistic”, or partially unpigmented. The divers reported seeing faint spots of colour on its flanks, and its eyes had dark rather than pink pupils.

Both albinism and leucism are rare genetic conditions in wild animals. When it occurs it makes young animals stand out and more vulnerable to predators, so they rarely mature to adulthood.

Bucket List Diver said the shark was the smallest at the site so they had assumed it to be a juvenile. Experts later stated that although there had been instances of white wobbegongs and smooth rays in Western Australia, a white grey nurse shark appeared to be a first.

The shark was assigned the reference number F217 and Bucket List Diver has been canvassing help in choosing a name, with Moonshine, Casper and Ghost the leading suggestions so far.

The grey nurse shark, Carcharias taurus, is known elsewhere in the world as the sand tiger or spotted ragged-tooth shark. Australia has two distinct populations: on the east coast, where the sharks are listed as Critically Endangered, and on the west coast, where they are considered Vulnerable.

Although never implicated in a fatal attack on humans, grey nurse sharks are still hunted for sport or on the assumption that they are dangerous. The divers reported seeing a number carrying hooks in their mouths and gills on the dive.