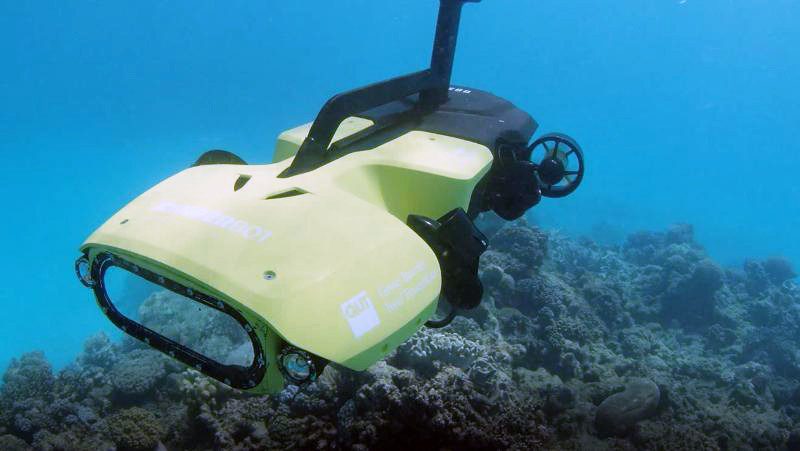 An underwater drone that can identify and kill coral-devastating crown-of-thorns (COT) starfish using a lethal injection is about to undergo final testing on Australia’s Great Barrier Reef prior to going into production.

RangerBot, which uses a hi-tec vision system that allows it to “see” under water, is operated using a smart tablet.

It has been developed by Queensland University of Technology (QUT) in collaboration with the Great Barrier Reef Foundation and Google – the concept won the Google Impact Challenge People’s Choice prize of Aus $750,000 in 2016, enabling QUT roboticists Professor Matthew Dunbabin and Dr Feras Dayoub to spend the next two years developing and refining the technology.

Their original “COTSbot” prototype was tethered, but RangerBot operates autonomously and has multiple functions.

“This multifunction ocean drone can monitor a wide range of issues facing coral reefs, including coral-bleaching, water-quality, pest species, pollution and siltation,” he said. “It can help to map expansive underwater areas at scales not previously possible, making it a valuable tool for reef research and management.

“RangerBot can stay under water almost three times longer than a human diver, gather more data, and operate in all conditions and at all times of the day or night, including where it may not be safe for a human diver.”

Prof Dunbabin said that the robot could distinguish CoTs (Acanthaster planci) from other starfish with a 99.4% accuracy rate, and that the lethal injection would not affect anything else on the reef.

RangerBot would also be inexpensive, he said, allowing production to be scaled up rapidly to meet demand from reef managers, researchers and communities worldwide.

The Australian Institute of Marine Science recently took part in RangerBot trials on the GBR and is investigating new technology to boost its data-collection and underwater-observation capabilities.

“RangerBot has the potential to revolutionise the way we manage our oceans, and is an important tool to have at our disposal in the quest to save our coral reefs,” said Anna Marsden, MD of the Great Barrier Reef Foundation.