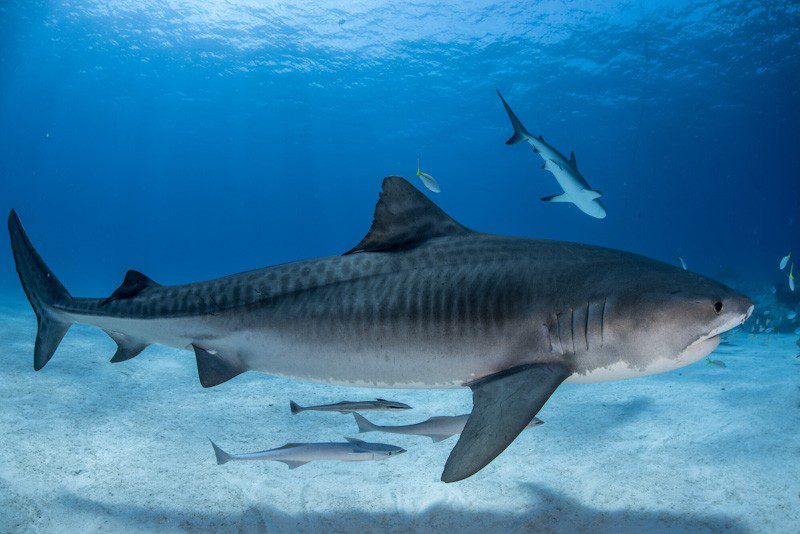 Tiger sharks overwinter in the Bahamas, then migrate far into open ocean but stay in the Atlantic. (Picture: Christopher Vaughan-Jones)

The tiger sharks that scuba divers might encounter in the Bahamas or the Maldives keep themselves to themselves genetically. Two distinct populations have evolved separately in the Atlantic and Indo-Pacific oceans, despite their long trans-oceanic migrations and consequent potential for mixing, according to new genetic research.

Tiger sharks (Galeocerdo cuvier) are found in tropical and subtropical seas worldwide, living in habitats ranging from shallow coastal waters to offshore depths and wide-ranging in their diet.

This suggests a shark capable of travelling vast distances, mixing freely and so in theory interbreeding – but that is far from the case, according to the research led by Dr Andrea Bernard of Nova Southeastern University in Florida. The results indicate that Atlantic and Indo-Pacific tiger sharks have not intermingled to reproduce for a long time.

“This long-term separation between Atlantic and Indo-Pacific tiger sharks has resulted in them developing into separate populations, each with its own unique genetic diversity,” says Prof Mahmood Shivji, the director of the Save Our Seas Foundation (SOSF) Shark Research Centre and a co-author of this study.

The SOSF says it’s now important that fisheries managers should recognise and conserve this diversity, in a species classified as Near Threatened on the IUCN Red List.

“Overfishing poses a clear danger to sharks,” says Prof Shivji. “The genetic diversity in overfished species will inadvertently be diminished and they won’t adapt to the fast pace of environmental change.

“Compared to other fish species, tiger sharks occupy an unusually wide variety of habitats. Given their influential ecological role and their widespread movements that expose them to a variety of fisheries, science-informed fisheries management of tiger sharks is important to achieve global conservation goals.”

The study, which also confirms that tiger sharks from geographically isolated Hawaii are genetically different from Indian Ocean tigers, is published in the Journal of Heredity.