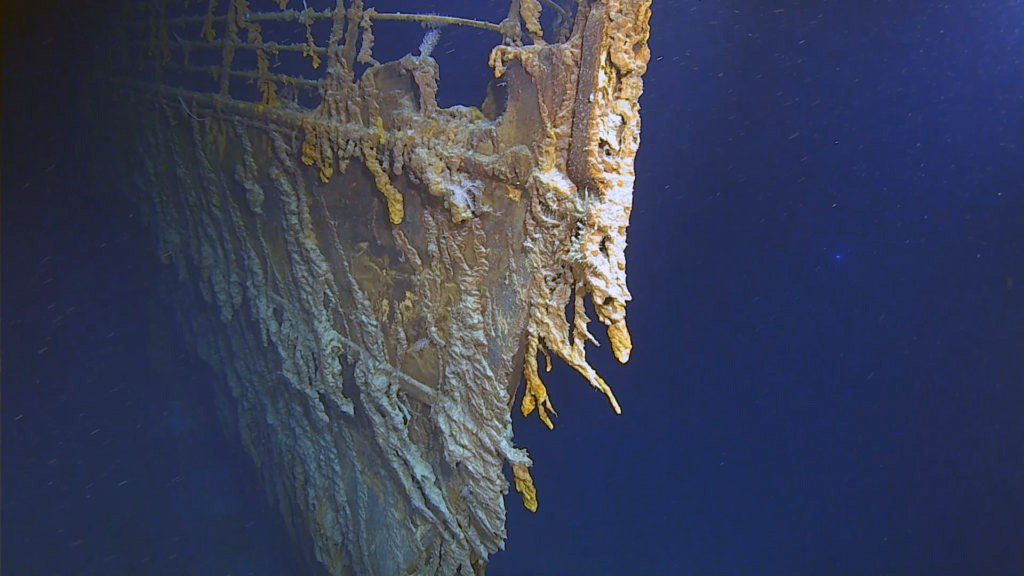 The “collision” between a submersible on a scientific expedition and the wreck of the Titanic last year was probably no more than the vessel touching a rusticle, says EYOS Expeditions, the British company that managed the dives.

It also denies that there was any delay on its part in reporting the incident, and says that a representative of the salvor-in-possession RMS Titanic, which had reportedly alleged a cover-up, had been present at the scene and was made aware at the time.

Yesterday’s news story on Divernet covered press reports of reaction to the incident, and its headline, “Sub Struck Titanic – Big Deal?”, reflected scepticism about whether the outrage said to have been expressed by RMST had been exaggerated. The salvor is currently facing opposition to its plans to cut open the Titanic’s hull to extract its Marconi wireless set.

EYOS Expeditions, working on behalf of Caladan Oceanic, hired and deployed a two-man Triton 36000/2 submersible to dive on the Titanic over eight days last August.

Its task was to assess its rate of deterioration by deploying science sampling devices, collecting devices placed on the wreck 14 years previously, and filming the wreck. The resulting high-definition footage is set to appear in a National Geographic documentary in March.

“At the completion of one of the five dives a small red mark was noticed on one side of the submersible, suggesting that it had made contact with the wreck,” EYOS Expedition stated yesterday. “There was no damage or scratches to the structure or paintwork on the Fibreglass shell of the submersible, and no impact was felt at the time.

“This indicates that the contact was very slight, most likely brushing a ‘rusticle’ rather than the wreck itself. The contact probably occurred when the submersible was collecting rusticle samples for the science programme. The contact was not a ‘crash’, as has been misreported.”

Fragile rusticles are stalactite-like rust-flake structures produced by the microbes that are eating the metal of the wreck, and turn to dust when touched.

“This potential contact was immediately reported to the observers from NOAA [US government agency the National Oceanic & Atmospheric Administration] and RMST who were present aboard the vessel for the duration of the expedition,” said EYOS Expeditions.

The company said that a full report was sent to NOAA following the expedition, one of the conditions of being allowed to dive the wreck. “It was not, as has been misreported, withheld or delayed,” it stated.

EYOS Expeditions has completed more than 1200 expeditions to the world’s most remote and inaccessible destinations.

“I have been part of seven expeditions to the RMS Titanic since 2005 and it is sad to see the wreck’s inevitable natural deterioration,” said expedition leader Rob McCallum, who is regarded as one of the world’s leading submersible operations experts. “We always treat the site with the utmost respect, holding a small ceremony when we arrive to deposit a wreath in memory of those who have been lost at sea, and adopting a strict ‘look, don’t touch’ policy.

“I am alarmed by the plans of RMST, who are seeking permission to breach the hull to remove further items for commercial gain. They have already removed thousands of items from the debris field around the wreck and are now seeking to enter the wreck itself to take more.

“I am delighted that the authorities are moving to protect Titanic from further invasive harm,” said McCallum, referring to recent news of the UK and USA announcing new levels of protection for the Titanic, as reported on Divernet.

“The wreck is the site of tragic loss of life and, while it holds a fascination for people all over the world, those who have lost their lives should be respected and the wreck left undisturbed.”