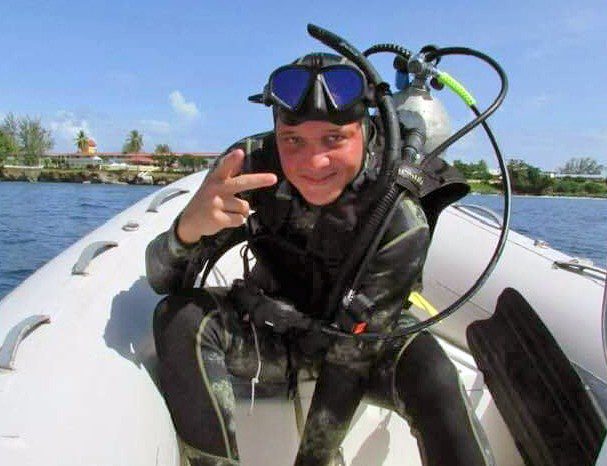 A scuba-diving spearfisherman who went missing from his boat off Trinidad managed to swim back to shore after spending a reported 16 hours in Atlantic waters.

Christo­pher Bu­gros, 24, was sep­arat­ed from the other two divers in his group on an offshore morning dive to the north-east of the island last Wednesday (10 April).

According to local reports it was the combination of a large bull shark sweeping past the divers and powerful undercurrents that caused the separation. The others surfaced and were able to get back to the boat.

Bugros surfaced about a mile from the vessel but in the rough conditions was unable to attract attention using his whistle or by waving. He later watched the boat leave the area to refuel and saw it return later to continue the search for him, but again the occupants failed to spot him.

In an attempt to swim back to land the diver, who had already discarded his weights, cut up his wetsuit to use with his empty cylinder to keep him buoyant, though he later ditched the tank as it was making it too difficult to swim.

He fashioned a makeshift snorkel from his regulator hose so that he could rest his neck for periods of time, and kept his speargun in case of shark attack. He was also drinking seawater periodically in an attempt to stay hydrated.

As night fell he continued his efforts, hoping to catch onshore currents and aiming for the light he could see from the Keshorn Walcott Lighthouse on Trinidad’s north-eastern tip.

He finally made it to shore on La Foret beach near Toco, some 25 miles from the dive-site, and slept on a pile of logs, too tired to move. As the sun came up he woke and managed to reach the home of a logger, who called the emergency services.

Bu­gros was taken to a local clinic suffering from ex­haus­tion and de­hy­dra­tion but was reported to have been given only antibiotics before being discharged.

He collapsed shortly afterwards and was taken to San­gre Grande Dis­trict Hos­pi­tal, where intravenous fluids were administered. He was discharged the following day.

The regional health authority later launched an investigation into the initial treatment of Bugros at Toco Health Centre, after a formal complaint was lodged by his family. They were al­so reported to have complained that the Coast Guard had called off search operations prematurely on the day he went missing.