‘We should fight to protect UK seagrass!’

‘We should fight to protect UK seagrass!' 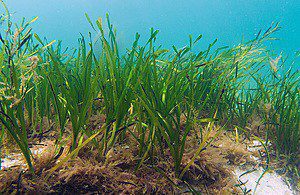 As much as 92% of the UK’s underwater seagrass meadows have been lost, according to new research that calls for urgent action to be taken to help restore them.

The study, a collaboration between University College London (UCL), Kings College London and Swansea University, is said to be one of the first to use seagrass data from diverse sources to produce a systematic estimate of the marine plant's extent both historically and today.

Growing in shallow coastal areas, seagrass is vital to healthy marine ecosystems, say the scientists. It supports fish stocks, provides seahorse breeding grounds and also removes carbon from the atmosphere. Although covering only one-thousandth of the world’s seabeds, it can absorb and trap carbon up to 40 times faster than forests can.

At least 44% of the UK’s seagrasses have been lost to industrial, agricultural and coastal development since 1936 – with 39% of that loss occurring since the 1980s. The figure is 10% higher than the average estimated global loss.

Had UK seagrasses remained at pre-1936 levels, they could have stored 11.4 megatonnes of carbon, or 3% of the UK’s CO2 emissions in 2017, say the researchers, and supported some 400 million fish.

Huge areas of the Humber and estuaries in Essex and Suffolk have lost seagrass, as have rural locations on the east coast of Anglesey in Wales, Cromarty Firth in Scotland and the inlets and estuaries of Cornwall. Only 8500 hectares now remain, say the scientists, although they recognise that some sites are showing signs of recovery.

Healthy meadows remain at places such as Studland Bay in Dorset, Lindisfarne, parts of Devon and the Scilly Isles, while in places such as Dale Bay in Pembrokeshire the Seagrass Ocean Rescue project has been working to reseed the seabed.

“Seagrass is the most wonderful unknown marine habitat out there, but it’s declining worldwide,” says lead author Dr Alix Green of UCL Geography. “In the UK, healthy examples of these flowering plants form dense lush green meadows, with long green strands up to 2m in height, in waters that are beautifully clear because of the plants’ cleaning properties.

“They’re also home to fish eggs and larvae of species important to our commercial fisheries such as cod, flounder and mullet. They form the only known breeding grounds for two seahorse species found in the UK and, if you're lucky, you'll spot enigmatic dogfish and huge crabs roaming among these meadows.”

While scuba divers in particular will appreciate such aspects, Dr Green also points out that seagrass beds “protect the shoreline from coastal erosion by absorbing the impact of storms – a service that will be vital in our changing climate”.

“The next decade is a crucial window of opportunity to address the inter-related crises of biodiversity loss and climate change – the restoration of seagrass meadows would be an important contribution to this,” says co-author Dr Peter Jones of UCL. “This will involve restrictions such as reduced boat anchor damage, restricting damaging fishing methods and reducing coastal pollution, including through Marine Protected Areas.”

“The catastrophic losses documented in this research are alarming but offer a snapshot of the potential of this habitat if efforts are made to protect and restore seagrass meadows across the UK,” adds Dr Green.

“We hope that this work will spur continued, systematic mapping and monitoring of seagrass meadows across the UK and encourage restoration and rehabilitation projects…  The UK is lucky to have such a resource in our waters, and we should fight to protect it!”

The study is published in the journal Frontiers in Plant Science.