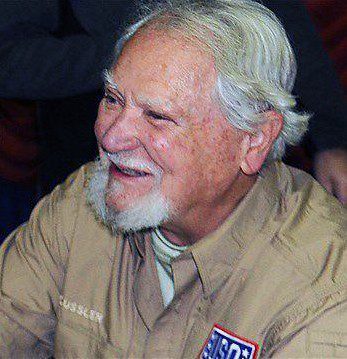 US scuba diver, shipwreck-hunter and best-selling novelist Clive Cussler has died at the age of 88.

Cussler used income from his successful writing career to launch the National Underwater & Marine Agency (NUMA) – named after a fictional organisation featured in his 25 Dirk Pitt underwater thrillers – and through it helped to discover more than 60 shipwreck sites.

Mounting small-scale expeditions on sonar-equipped research vessels, Cussler and his team would check out the marks they found on scuba. Finds and locations were passed on to official bodies, with Cussler at pains to stress that his motivation was always discovery, not treasure-hunting.

He was responsible for finding many significant shipwrecks through NUMA, including RMS Carpathia, the ship that picked up Titanic survivors; U-20, the U-boat that sank the Lusitania; the American Civil War CSS HL Hunley, the first submarine to sink an enemy vessel; and, from the same conflict, the first Confederate “ironclad” warship, CSS Manassas.

NUMA also believed it had tracked down the famed ghost ship Marie Celeste, although that identification was disputed.

Cussler was born in Illinois in 1931 and raised in southern California. He taught himself to scuba dive at the age of 20 while serving in the US Air Force, stationed in Hawaii. Inspired by reading about the exploits of Jacques-Yves Cousteau, he ordered what he later described as “one of the first scuba-rigs ever manufactured” from France.

He saw action during the Korean War, and on his discharge became a successful advertising copywriter and award-winning creative director, while continuing to dive and develop a fascination with shipwrecks.

His first book The Mediterranean Caper was started in 1965 though not published until 1973, but it was his third book Raise the Titanic!, made into a film in 1980, that cemented his reputation.

He launched his first expedition in 1978 to find the Revolutionary War frigate wreck USS Bonhomme Richard off England's Yorkshire coast. The wreck has still to be found (Cussler would mount many more expeditions in his efforts to locate it) but it was soon afterwards that he decided to create NUMA.

A prolific author, Cussler wrote 25 books in the Dirk Pitt series as well as the NUMA and Oregon Files series, all with a maritime connection, and the Isaac Bell and Fargo Adventures.

Collaborating with others in later years, he produced some 85 fiction and non-fiction books and sold more than 100 million copies in more than 40 languages. He was still writing up to his death.

In recognition of his non-fiction shipwreck books Sea Hunters, published in 1996 and 2002, State University of New York Maritime College awarded him a doctorate.

He also received the Naval Heritage Award from the US Navy Memorial Foundation for his marine-exploration achievements, and was a fellow of the Explorers Club, the Royal Geographical Society and American Society of Oceanographers.

“It is with a heavy heart that I share the sad news that my husband Clive passed away Mon,” Cussler’s wife Janet posted on Twitter. “It has been a privilege to share in his life. I want to thank you his fans & friends for all the support. He was the kindest most gentle man I ever met. I know, his adventures will continue.”

The cause of death was not announced.