‘Cows as fast as wolves’

‘Cows as fast as wolves’ 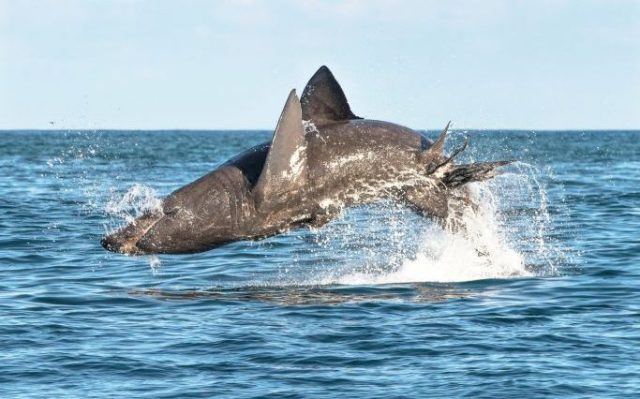 To learn that basking sharks breach at all may come as a surprise to many divers, but even more unexpected are the speeds these giants can attain to clear the water.

A new study has established that the world’s second-largest shark can not only leap clear of the sea’s surface by as great a margin as its cousin the great white, but can do so slightly faster.

“It’s a bit like discovering that cows are as fast as wolves (when you’re not looking),” said Dr Jonathan Houghton, Senior Lecturer in Marine Biology at Queen’s University Belfast.

He was part of a collaborative team of marine biologists that has analysed hundreds of videos of both species breaching to estimate their vertical swimming speeds at the moment they leave the water.

Cetorhinus maximus, usually thought of as a languid plankton-eater, was recorded leaving the water as fast as 11mph – 0.3mph quicker than the fastest recorded great white.

Videos taken both from boats and land backed up the findings of a data-recording device attached to one 8m basking shark off Ireland’s Malin Head. The device measured its speed and movement, and was also able to store video footage.

At one point, in just over 9 seconds and with 10 beats of its tail, the basking shark accelerated from a depth of 28m to leave the water at almost 90 degrees, clearing the surface to a peak height of 1.2m for one second.

To achieve this breach, the basking shark had increased its tail-beat frequency by a factor of six, and its top speed was more than double that of an average Olympic men’s 50m freestyle swimmer.

The great white shark videos used for comparison were recorded in 2009 off South Africa.

The reason for the basking sharks’ breaching has yet to be determined, but it could be signalling dominance, a mating display, communicating the presence of prey to other basking sharks or a means of removing parasites.

“This finding does not mean that basking sharks are secretly fierce predators tearing round at high speed,” said Dr Houghton. “They are still gentle giants munching away happily on zooplankton. It simply shows there is far more to these sharks than the huge swimming sieves we are so familiar with.”

Other participants in the research were the University of Roehampton, Trinity College Dublin, University of Cape Town, the Irish Basking Shark Study Group and the South African Institute for Aquatic Biodiversity.

The study is published in Biology Letters here.