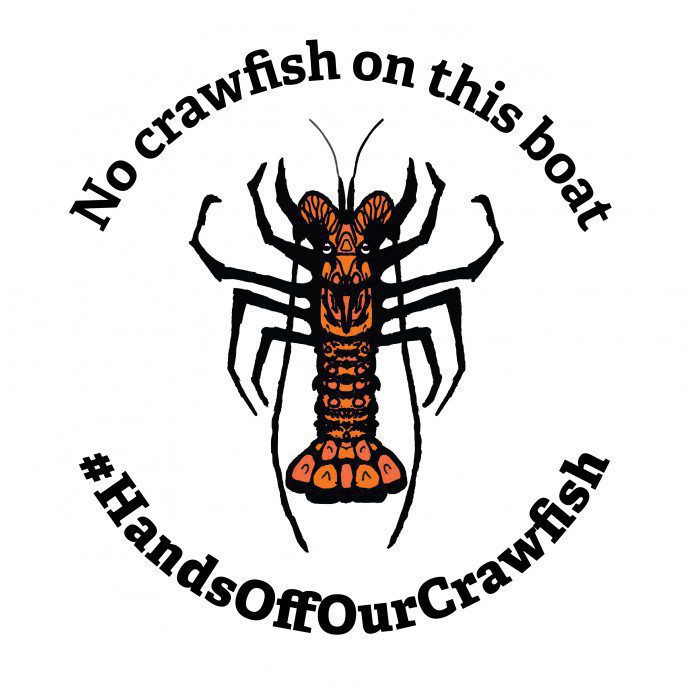 Scuba divers are being asked to show that they care about resurgent crawfish – by pledging not to catch any of the spiny crustaceans.

Cornwall Wildlife Trust (CWT) has just launched a national campaign called #HandsOffOurCrawfish, with dive schools, boats and clubs being encouraged to display its “No Crawfish On This Boat” stickers.

After nearly 40 years, crawfish, or spiny lobsters, have made a dramatic comeback, says CWT, with large numbers of young appearing on wrecks and reefs all around the Cornish coast and elsewhere in the south-west of England.

Early signs of their recovery were noted during a Seasearch survey organised by CWT and reported on Divernet two years ago. The slow-growing lobsters, which have long antennae and powerful finned tails, can live for up to 60 years. They communicate over long distances using a creaking sound created by rubbing the bases of their antennae against their shells.

Crawfish were overfished in the 1970s and ’80s by both fishermen and divers, and this time round CWT hopes that a sustainable fishery can be created.

“We dropped down to the seabed on a rocky reef off Newquay that I have dived many times over the years,” said CWT Marine Awareness Officer Matt Slater, describing his first crawfish encounter. “Within just a few minutes we found 18 beautiful crawfish.

Divers all around the South-west are reporting crawfish at their favourite dive-sites, and everyone is really pleased to see them back.

“The majority of recreational divers appreciate all the marine creatures they encounter and very few collect marine life to eat, preferring to enjoy peaceful encounters and underwater photography… if even small numbers of divers start collecting them, it would not take long for them to disappear once again.”

CWT says that Dive Newquay was the first company to sign up to its campaign. “Since we first set up our dive company five years ago we have always made our customers return any collected crawfish back into the sea,” said the centre’s Paddy Maher.

“No one wants to see these creatures wiped out again as they were in the 1980s. It makes absolute sense to educate divers and to ask people to think more about their impacts on the underwater world.”

The CWT asks them to look out for the  #HandsOffOurCrawfish hashtag on social media and to share crawfish photos and news.

The campaign is also being promoted through Seasearch in Devon, Dorset and the Channel Islands.