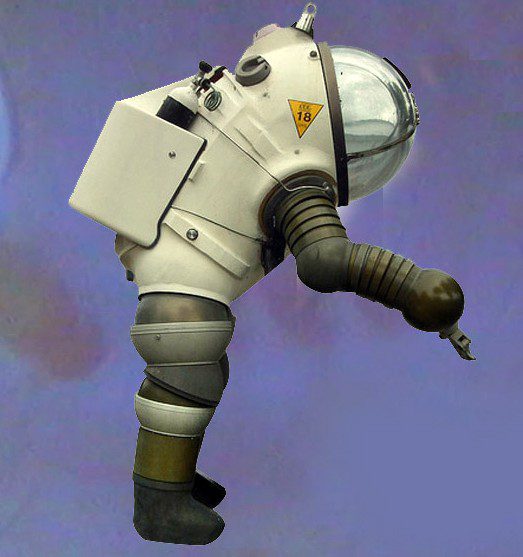 JIM 18 stands alone, but its keepers are hoping that it might be joined by its “soulmate”. The Diving Museum at Gosport has issued a request to divers who might have some idea of the whereabouts of JIM 19 to get in touch, so that it can put a matching pair of the atmospheric diving suits on display.

The two JIM suits have a bond – together they once undertook a range of assignments for the Ministry of Defence, says the museum. JIM 19 was in fact the final JIM suit to be built, in 1981.

Invented in the UK in the late 1960s for use by commercial divers, JIM suits were designed to maintain an interior pressure of 1 bar whatever the external pressure, allowing deep diving with no risk of decompression illness or nitrogen narcosis, and no need to decompress on ascent.

The makers, DHB Construction, named the suit after Jim Jarrett, chief test diver of the earlier Tritonia suit that inspired the invention. Oceanographer Sylvia Earle set a human depth record of 381m using a JIM suit in 1979, and the design became famous when another JIM appeared in the James Bond film For Your Eyes Only two years later.

The suits were widely employed in the offshore oil industry, including under ice, with later modifications giving them a 500m depth-rating. but by the end of the 1980s they had been superseded by other designs.

JIM 18 was loaned to the Diving Museum by the nearby Royal Navy Submarine Museum, and it is on display near one of the Newt suits that the design inspired. But JIM 19 is high on the museum’s list of potential acquisitions.

“If anyone can assist us in locating JIM 19, even if it’s only to say that it’s in another museum, we would be eternally grateful for the information,” says Richard Castle, a former JIM engineer and one of the Historical Diving Society volunteers who run the museum. Anyone who can help in the search is asked to email him at t479rcc@gmail.com.

The Diving Museum is open from 11-4 at weekends and on bank holidays during summer, admission £3. Find out more here.