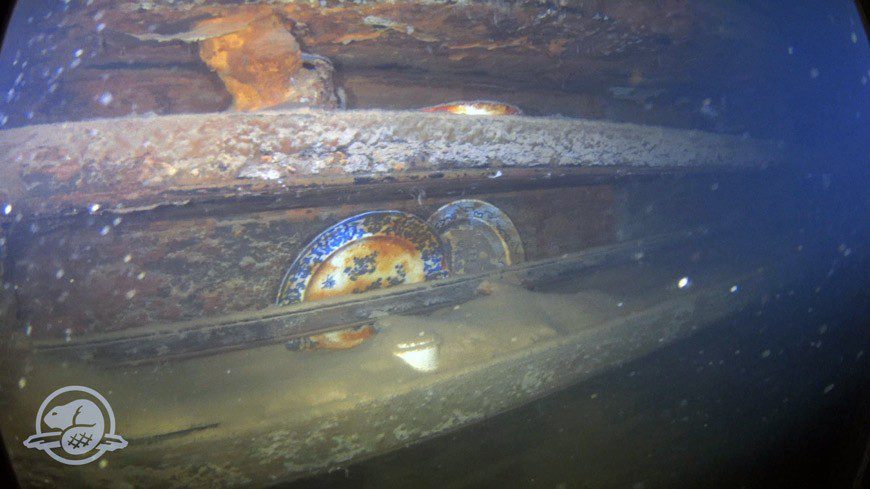 Plates and other artefacts on shelves beside a mess table where the crew would have eaten. (Picture: Parks Canada Underwater Archaeology Team)

The first systematic footage captured inside the historic Arctic wreck of HMS Terror has been released by Parks Canada’s Underwater Archaeology Team.

The government agency is collaborating with the local Inuit people to explore the wrecks of Terror and HMS Erebus. The two ships sailed from England in 1845 under Sir John Franklin in search of the fabled North-west Passage, and sank three years later.

The seven-day expedition, part of what is described as the most complex underwater archaeological undertaking in Canadian history, took place earlier this month, as reported on Divernet.  Research vessel the David Thompson arrived off King William Island in Nunavut on 7 August in what were described as exceptional weather conditions.

In the course of seven ROV dives 20 cabins and compartments were explored. Clear images were said to have been obtained of more than 90% of the ship’s lower deck, including the captain’s and other officers’ cabins and the crew’s living quarters.

HMS Terror has been well-preserved by the cold, deep water of Terror Bay and by layers of protective sediment. In the officers’ cabins beds, desks and shelves, some with items on them, remain in place.

More shelves with plates, tumblers and stemware glasses remain in what is thought to have been the officers’ mess pantry. Further rows of shelves containing intact plates, bowls and glasses were found in the forward area where the lower ranks were accommodated.

Best-preserved, with the help of sediment that had seeped in through the stern gallery windows, was Captain Francis Crozier’s cabin. His desk, map cabinets with closed drawers, boxes probably containing scientific instruments, a complete tripod and a pair of thermometers were identified.

The only closed door on the lower deck was the one leading to the captain’s sleeping quarters.

Parks Canada says it expects that further investigation will reveal documents sealed and still legible in these areas, preserved by the darkness and a water temperature of around zero.

“The impression we witnessed when exploring the HMS Terror is of a ship only recently deserted by its crew, seemingly forgotten by the passage of time – regardless of the fact that it was approximately 170 years ago that the Terror sank unceremoniously to the bottom of the bay where it now rests,” said Parks Canada Project Director and ROV pilot Ryan Harris.

“As joint owners of the artefacts, we share Parks Canada’s excitement over the amazing potential to unlock more of this mystery which, combined with Inuit traditional knowledge, will help paint a more complete story of the Franklin Expedition and its fate.”

Footage of the wreck of HMS Terror can be seen here.