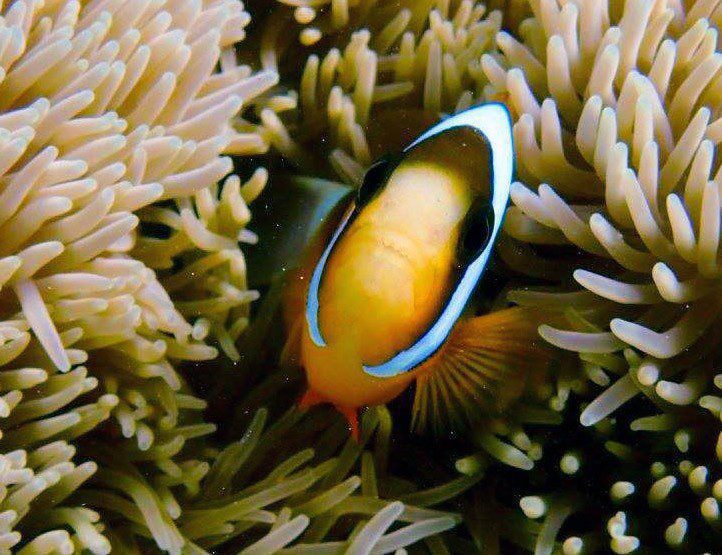 Fish don’t appreciate low-visibility conditions any more than scuba divers do, it seems. According to scientists in Australia, they become anxious and more cautious when sediment degrades water quality – and the result can be stunted growth and poor health.

Human activity has seen more sediment deposited in coastal waters than ever before, says Dr Jodie Rummer of the ARC Centre of Excellence for Coral Reef Studies, which is based at James Cook University in Townsville: “We wondered if this reduced visibility affected fish performance, especially their ability to escape predators.”

PhD student Sybille Hess led a team examining the response of one-month-old cinnamon anemonefish to a simulated predator attack after they had been living in a sediment-filled tank for seven days.

“We found that the fish responded faster and were able to dart away from the simulated predator attack more effectively than those living in clear water, which suggests that the fish are on high alert owing to the decrease in visibility,” said Hess.

The fish living in turbid water were also less active in looking for food, and avoided open areas. “But while the faster responses and more cautious foraging may increase survival rates in low-visibility environments where predators are present, there is a price to be paid,” said Hess.

The trade-off is that additional energy spent avoiding predators reduces energy available for growth, maintenance and reproduction – which might ultimately prove more damaging to prey-fish populations than the predators themselves.

Juvenile anemonefish that would normally migrate frequently between host anemones were likely to curb such risky behaviour in low-visibility conditions, she said. This could limit their access to food and the possibility of finding a suitable home.

“Just simply enduring reduced visibility may be enough to affect fish,” said Dr Rummer. When fish felt constantly endangered “this perceived risk takes energy away from other important tasks – side-effects could include impaired growth and a compromised immune system.”

The team now plan to turn their attention to the effects of low-visibility conditions on predators.

Their study is published in Coral Reefs..