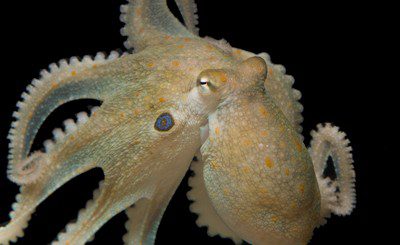 Octopuses are well known for being smart but are also famously anti-social – they tend to keep themselves to themselves and are generally hostile to other octopuses, even to the point of killing and eating them when they come into contact.

But now US scientists have established an ancient link between octopuses and human beings that goes far beyond intelligence and way back in time – a shared susceptibility to the mood-altering effects of drugs.

The link is based around serotonin, a regulator of growth in animals and plants. In humans the chemical transmits messages between nerve cells that regulate mood, and is also connected to certain types of depression.

Now the drug has been shown to chill out octopuses in the same way, which, according to the Marine Biological Laboratory at Woods Hole, Massachusetts, indicates that serotonin has been regulating social behaviour ever since the common ancestor of humans and octopuses diverged on the evolutionary tree.

The study was led by MBL research scientist Eric Edsinger, part of the team that sequenced the first octopus genome three years ago, and neuroscientist Gul Dolen of the Johns Hopkins University School of Medicine.

They tested the social interactions both with and without the drug of two-spot California octopuses (Octopus bimaculoides) in a tank at the MBL. When left together after having been placed in diluted MDMA, which they absorbed through their gills, they became relaxed, friendly and even playful with each other.

The scientists believe that the drug works by amplifying what low level of tolerance octopuses reserve for each other.

Analysis indicated that a serotonin transporter protein known to be involved in how MDMA binds to brain cells and alters mood has features that are almost identical in humans and octopuses and which our last common ancestor must have shared 500 million years ago.

“If a gene sequence is conserved for 500 million years, it must be very important,” said Edsinger.

The study is published in Current Biology here.