You can’t keep a good man down – except that go-to wreck-hunter SELCUK KOLAY is always below the surface, finding new and often significant wrecks. A recent find was of an oil tanker sunk by famed British sub HMS Perseus in the Aegean in WW2. Main underwater photography by Ali Ethem Keskin 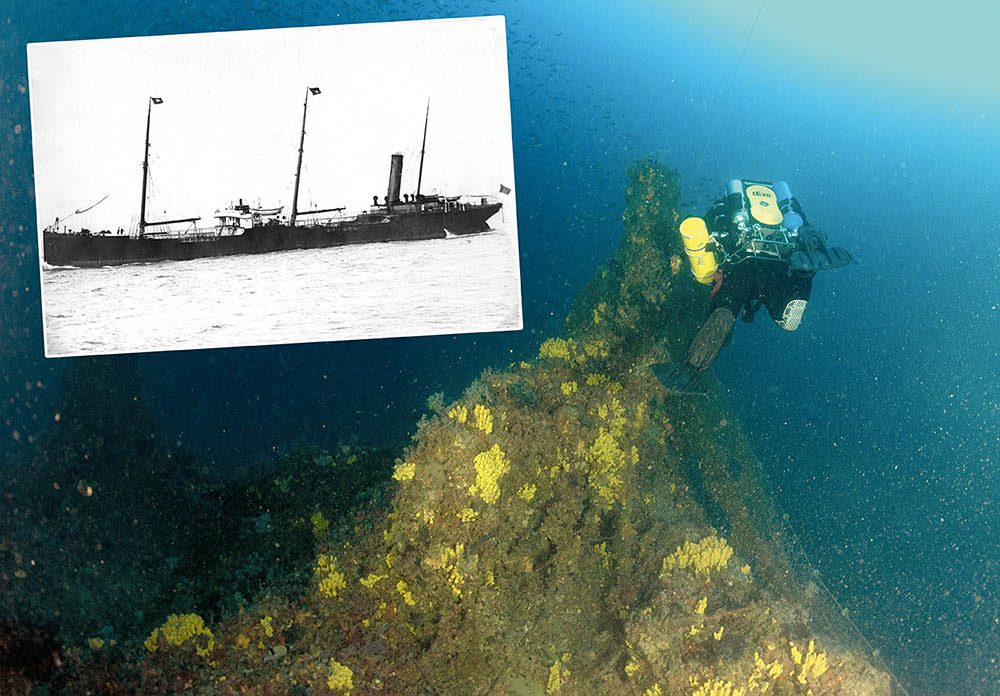 Selcuk Kolay on the bow of the Maya. Inset: The Lackawanna, later the Maya.

at the start of june 2016, I was in the Aegean Sea on my way from the Dardanelles to Babakale, the most westerly point of Turkey.

I planned to dive ss Melpomeni, a wreck I had discovered back in 1980.

I decided to take the westerly route around the island of Bozcaada (Turkish for Tenedos) with my scanning sonar on, and about six nautical miles south-west of the island I noticed a previously unknown wreck at a depth of 68m.

It was already late afternoon, so I decided to stay overnight on the island and dive the wreck next morning before proceeding to Babakale.

With my dive-buddy Kaya Yarar we made for the harbour at the north-east point of the island and enjoyed a wonderful dinner at a local seafood restaurant.

Right after the breakfast at the port next morning, we headed back out to the wreck-site. It was a calm day and the surface was very smooth but, getting close to the co-ordinates, we noticed a thin layer of oil – and a strong smell of fuel.

Right on top of the wreck we could see oil-bubbles emerging from the depths.

I was quite sure that the wreck had to be that of a tanker.

Carefully examining the sonar image, I realised that the wreck was broken in two, with the sections angled at 45°, the bow pointing roughly south-west and the stern north-west.

We sent the shotline down and prepared to dive, using 18/45 as the bottom mix. We landed next to the stern, where the shotline was, and realised that the whole aft section was lying on its port side. This was obviously quite an old ship, but with oil-bubbles still emerging at various points.

Trying to avoid the oil, we moved over the hull to the side where the deck was. Swimming along the deck at the side of the wreck, we headed midships while taking video footage.

After a while we encountered a debris field, and the wreck ended. This was the break-point, but as the front section wasn’t visible, we decided to return to the shotline to avoid having to make long decompression stops.

The bow section would require a second dive, but as the weather deteriorated we decided to leave it for another occasion. Next day we left the island and continued to Babakale.

On our way, I was considering the possible identity of this tanker wreck. There had been a lot of activity around the island during World War Two. Tankers had fallen victim to British submarines while carrying fuel from Romania to North Africa for Hitler’s army.

The Italian tanker Maya, built in Britain back in 1894, had been carrying some 7000 tons of diesel fuel when she was torpedoed by HMS Perseus in 1941, and the German tanker Wilhelmsburg was transporting even more diesel fuel, around 8000 tons, when she was sunk by HMS Rorqual.

In September at an international shipwreck conference on the Greek island of Kea I met German underwater researcher Dimitri Galon. His grandparents were originally from Bozcaada, so he had an interest in the wrecks around the island.

After examining his documents we concluded that the Wilhelmsburg had been torpedoed further north, so it looked as if the wreck I had discovered in June had to be the Maya.

Dimitri decided to join us at Bozcaada with his team of three other divers the following year to dive the wreck, and the Turkish and German teams met at the port of Bozcaada in September.

I decided not to dive this time but to concentrate on marking the wreck in such a way that the shot would land in the debris field where the break had occurred. That way the divers would be able to see the whole wreck on their dive.

Making several passes over the wreck and watching the sonar screen very carefully, I managed to place the weight right between the two sections.

They were able to cover the whole wreck, took some good video footage and reported no leaks from the bow section, which sat upright on its keel 25-30m from the stern section.

We had to wait a few days for better weather before the next dive. As I had already covered the stern section I planned to dive the bow with underwater photographer Ali Ethem Keskin on rebreathers, using 18/45 as the diluent gas.

The visibility was nothing special, at around 5m, but the bow was huge and impressive.

We moved over the two big Admiralty-type anchors still in place on both sides of the forecastle and swam over the front deck towards the bridge, where the upper timber structure was completely gone.

Just behind the bridge we could see the big air-vents on both sides, and behind them the debris field where the ship had broken, at the foot of the second mast.

We headed back along the port side towards the bow, reached the shotline and returned to the surface after some 36 minutes of total decompression time.

After an early dinner that evening we all got together and scrutinised the footage to be sure about the identity of the wreck, comparing it with original pictures and specs.

The masts, the position of the funnel at the aft, the poop, the superstructure amidships, the winch, the anchors and the small crane at the forecastle were among the details that, combined with the wreck’s dimensions and position, which accorded with German war diaries, left no doubt about the identity of the wreck. By the end of that session we knew that this was indeed the Italian tanker Maya.

We celebrated, and both teams agreed to get together again the following year to work on a new wreck-discovery project.

Since then, I believe I have located the German tanker Wilhelmsburg, though I have yet to carry out the dives needed to verify the wreck’s identity.

They might have been sunk a long time ago, but the existence of both of these oil tanker wrecks clearly poses an on-going threat to the future of the Aegean Sea, Turkish and Greek coasts and the Greek islands.

STORY OF THE MAYA

The 108m ship was built by David J Dunlop at Port Glasgow, launched as the Lackawanna in 1893 and completed the following year.

Tonnage was 3855 gross, and her 413hp three-cylinder reciprocating steam engine gave a maximum speed of 9.5 knots.

Anglo-American Oil bought the Lackawanna in 1901, and in 1909 sold her on to Deutsch-Amerikanische Petroleum in Hamburg, which renamed the ship Sirius.

In 1919 she became US Government property as part of German war reparations, and later that year was passed on to the Belgian government.

In 1921 Sirius was sold to the Società Andora of Genoa, renamed Fiama and began a 20-year career sailing under the Italian flag.

When Italy entered WW2 in June 1940, the Italian Navy requisitioned the Maya from Cisterne Italiane Soliani e Saltamerenda of Genoa for use in the Adriatic, Aegean and Black Seas.

At 7.35am on 5 September, 1941, while steaming in convoy from Piraeus in Greece to the Dardanelles with the Romanian freighter Balcic and Italian torpedo-boat Sirio, Maya was attacked by British submarine HMS Perseus, commanded by Lt-Cdr ECF Nicolay.

Perseus fired four torpedoes, its log stating that Maya had turned to port with a list before Perseus dived to avoid a depth-charge counter-attack.

At 9.36am Perseus went up to fire a further torpedo at Maya, which had stopped and was listing about 50° to port with her gunwale submerged. The torpedo missed, and another depth-charge counter-attack followed. When Perseus came back up at 10.37 there was no sign of the Maya or the Balcic.

Maya had received one hit amidships but sustained only one casualty. Sirio took her on tow but, deemed beyond salvage, cannon were used to scuttle the tanker south-west of Bozcaada.

HMS Perseus would hit an Italian mine three months later off Cephalonia, sinking with the loss of all but one of the 60 crew, as described in DIVER (The O2 Rebreather Miracle, January).