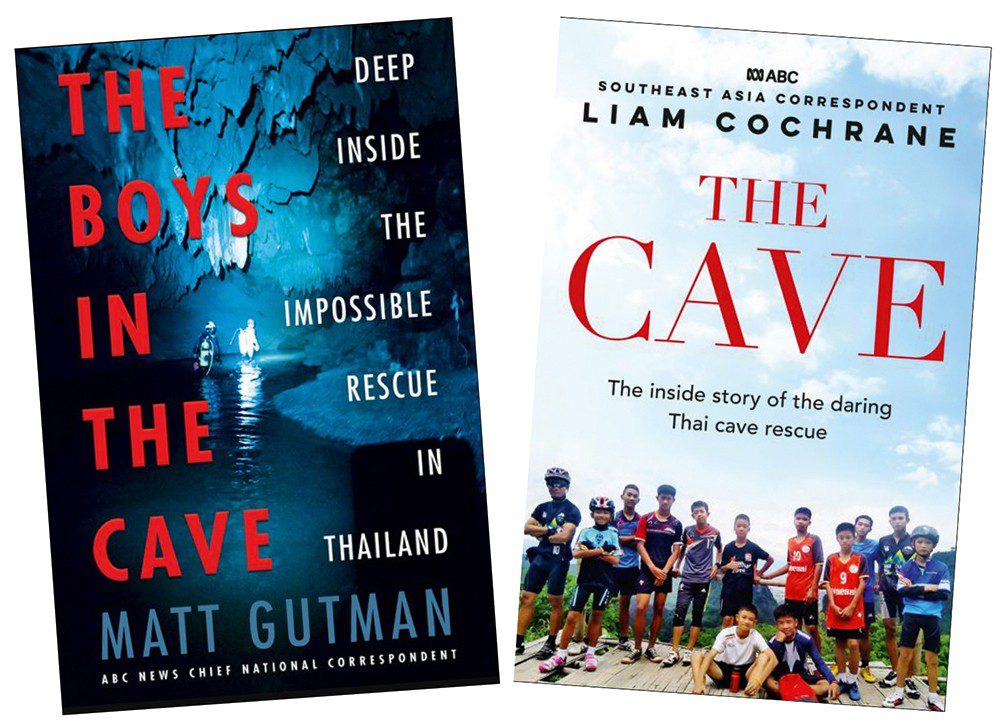 IN JUNE 2018 a dramatic cave rescue began in Thailand that was to grip attention worldwide.

As it drew to a miraculous conclusion, it was inevitable that books and movies would follow.

I was amazed when the first two books on the subject were sent for review in December, fewer than five months from the conclusion of the event.

To turn a book out in that time – wow!

The first to drop through the letterbox was entitled The Boys In The Cave, by US journalist Matt Gutman.

The second, a couple of weeks later, was The Cave by Liam Cochrane.

I was struck by the fact that both these works are derived from the same publishing house – HarperCollins.

The accompanying leaflet for reviewers gave the same contact for both books. I read them in the order in which they were received.

The Boys In The Cave was subtitled Deep Inside The Impossible Rescue In Thailand. My instant reaction was that, although hardback, the book looked and felt cheap and tacky.

The cover image, showing two distant divers in a tunnel, was poor; the wordage overly sensationalised.

Given the short period of time given to the preparation of this book I was genuinely interested but cynical as to what it would offer.

Barely had I opened it when a gross error stared at me from the Contents page. Chapter 13 was entitled The Wet Mulles. It referred to the Australian team of divers correctly known as the Wet Mules.

On to Page 1. I noted at once that my friend, British diver John Volanthen, had his name incorrectly spelt. Throughout the book, and we are talking hundreds of times, John’s name was consistently incorrect.

On page 3 my attention was caught by Gutman’s poor understanding of the principal rescue divers. He referred to them as “naturally pessimistic.”

This lack of knowledge of the people involved, and the simple lack of caving/cave-diving understanding, was to crop up again and again.

Historical research into the wider subject matter had been poor. A statement such as “Yet over the past 90 years more than 130 people from Britain alone have died cave diving” was a gross, inexcusable exaggeration, utter crass hyperbole (that figure should be fewer than 25!).

It was equally evident that Gutman had a very poor grasp of the cave environment. The factual errors, the product of hasty compilation, just kept appearing. Knowledge of diving was laughable: he refers, for example, to having “steel O-rings at either end” of containers to ensure that they are waterproof!

Again, recounting the rescue that Rick Stanton and Jason Mallinson had conducted in Mexico, in 2004, we are told that: “Six soldiers clung to a ledge above a subterranean river in relative comfort…” Clearly you can’t let the truth get in the way of a good story.

And on the very next page, an incident involving the loss of a leading French cave diver is similarly dramatised – incorrectly.

Some touches of humour, such as the description of Rick Stanton entering the cave and diving with an old car inner-tube strapped to his back, were engaging, however, as was John Volanthen’s comment about the same equipment: “You’ll look like a cockwomble.”

Having been critical of the shoddy “race to the bookshelves” demonstrated by Gutman, I was suitably primed on what to look out for in Liam Cochrane’s book The Cave.

The cover, an image of the Wild Boars football team gathered at the surface, was altogether more attractive from my perspective than that used for the Gutman book, but unfortunately the image on the back cover was confusing and would better have been left out altogether.

As with the other book, more than 40 images were used inside.

After that, and despite the fact that the two authors were both news correspondents, and the format of each book was essentially the same, it was quickly apparent that their respective offerings were like chalk and cheese.

Cochrane’s writing was easy to read and flowed naturally. Gutman’s book had clearly been intended for an American audience, using some terms that we in the UK might struggle to understand.

Likewise, all his distances had been quoted in feet, yards and miles, whereas Cochrane uses metric, which seems so much better in a cave-diving context.

I was hunting for errors in The Cave, but found few. There were 337 pages in the book and it seemed evident to me that those few extra weeks taken in producing it had been crucial.

Final comment: The Cave is by far the better book, in all respects.

The Boys In The Cave: